Parents need to be aware that this movie raises the topic of sexual consent, in both positive and negative ways.

Imagine the humiliation! A police dog named Max (voice of Ludacris) is assigned to go undercover with his his human partner (Will Arnett) to figure out some mysterious dealings at a big Dog Show. But the mission requires the tough Rottweiler to pretend he is a fancy show dog.

Violence B-
Sexual Content D
Profanity B
Substance Use A-

Why is Show Dogs rated PG? The MPAA rated Show Dogs PG for suggestive and rude humor, language and some action.

Fish out of water scenarios are a frequent source of comedy in movies. In Show Dogs, the fish is a dog. Max (voiced by Ludacris), a gruff and aggressive member of the NYPD canine unit, goes undercover as a contestant at the fictional Canini dog show in Las Vegas. He is paired with Frank (Will Arnett), a clueless human FBI agent, whose first meeting with Max involves jurisdictional disputes, reckless driving, and a bite on the buttocks. Over the course of the film, Max and Frank learn to work together in a common cause.

Max and Frank’s case is guaranteed to tug at the viewer’s heartstrings. Li Ling, a baby panda, has been kidnapped by animal thieves. The two detectives are assigned to find Li Ling and return her to the zoo and her mother’s care. While investigating the panda’s abduction, the duo learns there is an illicit global market for exotic animals and the winner of the Canini show will likely be the next target.

Succeeding in the case requires a major attitude shift on Max’s part. Originally contemptuous of show dogs, Max reluctantly pretends to be one. But as he becomes increasingly concerned about the fate of the stolen animals, Max starts to work harder at the role and develops a growing respect for the competitors. He even accepts help from pug Sprinkles (voiced by Gabriel Iglesias) and disgraced champion papillon Philippe (voiced by Stanley Tucci). He also finally learns to cooperate with Frank. As they all pull together, Max realizes that “Everything works out a whole lot better when you can learn to trust people who see the world in a different way.”

Respect for diversity and the need to worktogether are the best messages in the film. However, parents need to be aware that this movie raises the topic of sexual consent, in both positive and negative ways.

The first of these issues arises when a man they are investigating wants to have his dog bred with Max against his wishes. Correctly interpreting Max’s feelings, Frank refuses, even though it costs him an opportunity to get closer to the suspect. When he wonders why Frank would reject such an offer, Frank insists that everyone, even dogs, is entitled to choose who they love.

The second message is alarming for parents and is inexcusable in a children’s movie. As part of the finale, each animal receives a thorough examination, including genital palpation. Max has already had a bikini wax treatment, which has only increased his resistance to having his backside touched. Whenever Frank tries to practice the exam and gets close to Max’s posterior, Max bites or gets angry. This is played for laughs. Philippe insists it is a necessary part of being a competitor and tells Max to be calm and “go to your happy place”. During the final event when the judge comes, hand extended towards Max’s testicles, the dog “goes to his happy place”. He dissociates from the event and imagines a montage of kibble and fire hydrants which concludes with a bromantic dance scene with Frank. When Max comes back to himself, loud music with the lyrics “I’m sexy and I know it” is playing.

Parents who have taught their children that they have the right to control their bodies and say “No” to unwanted touching will be very disturbed by this scene. Although Max is a dog, he is portrayed with human feelings and viewers are encouraged to identify with him. Any scene that suggests characters should “go to their happy place” and dissociate themselves from their bodies during an episode of unwanted physical contact is unacceptable. This movie will be particularly troubling for those who are survivors of any type of sexual assault.

Show Dogs is best summed up by a line in the film. When Philippe agrees to help Max train for the dog show, he says, “I cannot polish the turd but perhaps we can roll it in glitter”. Even Hollywood glitter can’t disguise the rotten messages this moviegives vulnerable viewers.

Why is Show Dogs rated PG? Show Dogs is rated PG by the MPAA for suggestive and rude humor, language and some action.

Violence: Two dogs fight; one winds up in the harbor. A dog almost gets run over by reckless driver and ends up being flipped over the hood of the car. A dog bites a man’s buttocks in revenge. There are several episodes of dogs biting ankles or pant legs. A dog bites a woman’s phone and runs off with it to destroy a selfie he dislikes. A dog grabs the steering wheel from a man and drives a car recklessly through a crowd. Dogs drive a plane in a hangar, dumping items from the door to harm a pursuing villain. A character repeatedly shoots a firearm at an FBI agent without injuring him. Two characters have a fist fight; a third character hits one hard enough to knock him out briefly. A man is in a plane with an angry tiger: a photo of him with claw marks is shown later. A panda bear is almost sucked into propeller engines but is saved at the last minute.

Profanity: There are terms of deity used in the movie and occasional mildly crude language.

Alcohol / Drug Use: A street dog swaps information for what is supposed to be catnip, to which he is addicted. He is given a chew toy instead.

Dog shows are popular events, attended and viewed on television by millions of aficionados every year. Devoted owners invest time and money in preparing their pets for the show ring. Despite this enthusiasm, not all dog lovers are enthusiastic about these events. Some argue that enforcing rigid breeding standards leads to genetic disorders. Do you agree that this is an issue? If so, what do you think should be done about it? Other animal lovers also argue that these shows underwrite puppy mills and cause more suffering for dogs without pedigree backgrounds. Do you think there are ways to maintain the fun of dog shows while mitigating their negative aspects? Introduction to dog shows. More about dog shows. Dog owners invest heavily in dog shows. The genetic problems related to pure breeds. More problems with breeding. The relationship between dog shows and puppy mills.

The #MeToo movement has drawn attention to sexual assault and consent. What do you think of the way consent is handled in this movie? Why do people struggle with saying no to unwanted physical contact? Max forces himself to go along with the genital contact because he believes winning the dog show is essential to solving his case. Is it necessary? What options are available for people experiencing sexual harassment or assault in the workplace? What can be done to protect and empower children and anyone facing unwanted touches or other activity? The high costs of sexual activity without consent. Workplace sexual harassment. Protecting children from sexual assault. More sexual abuse prevention ideas. See also:

The most recent home video release of Show Dogs movie is August 21, 2018. Here are some details…

Guinea pigs take on an evil industrialist intent on world domination in G-Force. In The Rescuers, intrepid mice rescue a girl from kidnappers. The Rescuers Down Under continues their adventures in Australia. Another FBI agent goes undercover at a beauty contest in Miss Congeniality. Director Raja Gosnell also worked on the movies Beverly Hills Chihuahua, The Smurfs and Smurfs 2. 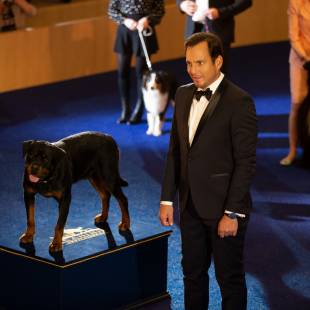 Show Dogs Gets A Needed Makeover