On the evening of February 10, 2014, Shirley Temple Black passed away at the age of 85 at her home in Woodside California. Perhaps the most legendary of child stars, the girl with the famous curls managed to rocket to fame and earn (according to the New York Times) $3 million in her early years. Yet even more impressively, after her childhood charm faded from the screen she went on to not only be a functional adult, but one who set an inspiring example for all children—and especially girls. Looking back, Shirley’s career seemed to be, borrowing from her famous song, a path covered in lollipops and bon-bons. However she still had to endure a Hollywood initiation that could have easily sent her in a destructive direction, one that seems so common to today’s child stars. To begin she had the stereotypical parent (in this case, her mother—her father was busy with his employment as a banker) who was determined to see her daughter become a performer. Born in Santa Monica, her 1988 autobiography Child Star tells of her early dance lessons. That led to her first “big” film break—a series of sexually suggestive short films with the title Baby Burlesks in which children wore stylish adult clothing on top, with a diaper on the bottom. The point of the series was to parody well known films of the time. In addition to the demoralizing onscreen depictions, if the children misbehaved on set they were locked in a windowless sound booth with only a block of ice to sit down on. Shirley says in her autobiography, “As far as I can tell, the black box did no lasting damage to my psyche ... It’s lesson of life, however, was profound and unforgettable. Time is money.”

Fortunately Shirley’s work opportunities improved. She soon was capturing small bit-parts in other movies and, with her mother lying about her age to keep her a year younger, she was worming her way into Fox studios and the hearts of Audiences as a major motion picture actress. (It wasn’t until her 12th birthday that Shirley discovered she was 13.) At six-years-old the Academy of Motion Picture Arts and Sciences presented Miss Temple with the first Juvenile Academy Award, leaving her with the honor of being the youngest ever recipient.

To give you an indication of Shirley’s popularity, during the Great Depression, President Franklin Roosevelt said, “As long as our country has Shirley Temple, we will be all right.” (Can one imagine whose name we would place in that sentence today?) And not only was the U.S. all right, she is also credited with saving Twentieth Century Fox from bankruptcy. The Shirley Temple Development Division at the studio employed 19 writers and the little actress was a top priority for studio head Darryl F. Zanuck.

Yet the most impressive aspect of Shirley’s life is how she chose to spend her time after her career ended. She played in movies up until her late teens and married John Agar at the tender age of 17 (he was 7 years older). But Agar’s drinking and other issues led to a divorce in 1949 and she retired from acting. Not long after she met Charles Black in Hawaii. He was a former naval officer and hadn’t seen a single one of her movies. Two weeks later he proposed and the two of them became another Hollywood anomaly: They were married 55 years until Charles passed away from cancer in 2005.

While happily married Shirley began to find her next career role. She was the president of the Multiple Sclerosis Society, a disease that afflicted her brother George. She was one of the founders of the San Francisco International Film Festival, but later resigned in 1966 to protest a decision to show a film at the event that she described as “pornography for profit.” In 1967 she ran for Congress (and lost). Then in 1969, President Nixon appointed her to the U.S. delegation to the United Nations General Assembly. In 1974 she became the U.S. Ambassador to Ghana. The decision riled other career diplomats who later had to admit that Ambassador Temple-Black was outstanding. That followed a posting to Prague and a commendation from Henry Kissinger, describing her as “very intelligent, very tough-minded, very disciplined.” During this period she also battled breast cancer and became a support to many others at a time when women quietly did what was necessary to endure the disease.

Many may wonder how Shirley Temple-Black managed to circumvent the mine-field of trouble that seems to take the lives of so many child stars. Unlike the way movies of that era portrayed life, Hollywood was anything but a land of high moral values. During her years at Fox Studios she had a special bungalow where she spent her off camera time, an overt attempt to keep from being polluted by other influences. In her biography she recalls when a studio executive told her, “If I lost my innocence, it would show in my eyes.”

Indeed Shirley’s ability to take the high road and use her good looks, wit and charm to better the world has always shown in her “bright” eyes.

(This post includes information gathered from the book Child Star: An Autobiography

, along with information from The New York Times and The Hollywood Reporter.) 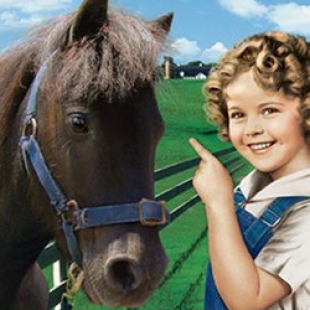