This film avoids the syrupy sentimentality that bogs down many Christmas movies and delivers a strong story with meaningful messages.

Netflix: A boy named Nikolas goes on a quest to find Elfhelm, the fabled village of the elves. Along with a loyal pet mouse and a reindeer named Blitzen, Nikolas discovers his destiny.

“Times are really, really hard. We’re all miserable,” laments the King of Finland (Jim Broadbent) to his subjects. “We all need hope and a spark of magic to keep us all going.” Shrugging off their suggestions about healthcare, living wages, and food security, the King asserts that what they really need is for brave souls to embark on a magic-seeking quest, promising wealth for those who succeed.

Among those who choose to go on the dangerous trip is Joel (Michiel Huisman), a widowed woodcutter who doesn’t believe in magic, but who does believe in the security that comes with lots of cash. He decides to take the risk for the sake of his son Nicholas Henry Lawfull), who he leaves in the care of his selfish, callous sister (Kristen Wiig).

Joel might not be a believer, but Nicholas is. His late mother raised him with stories of Elfhelm, the hidden elf kingdom and the happiest, most magical place on earth. When Nicholas discovers that she also left behind a map to that realm, he heads off in pursuit of his father.

Kids’ Christmas movies run the gamut from clichéd shlock through to meaningful classic entertainment. A Boy Called Christmas might or might not become a classic, but it avoids the syrupy sweetness that gums up many seasonal offerings and offers moments of dry wit, wintry adventure, and an unexpected twist on Santa Claus’s origin story.

The big surprise with this film is how dark it gets. Like Netflix’s other Santa origin tale, Klaus, this story has Father Christmas emerge as a balm in times of suffering. And there’s suffering aplenty here. The people of Finland are poor and cold and hungry. The residents of Elfhelm are frightened and oppressed. Nicholas has been bereaved by the death of his mother, has suffered abuse at the hands of his aunt, and faces the loss of his father. There are dark moments of death, sorrow, and shattered illusions in this film, but they give the story depth and meaning, raising it above the sugary tropes that too often dominate holiday entertainment. There are lessons here about living with grief, moving forward after loss, developing resilience, being kind when it’s hard, fighting back against fear and ignorance, and living with integrity. As Nicholas says in an agonizing moment, “Being good is better than being rich. Better than anything.”

It’s a sign of a good family film when adults and kids can watch the same movie and see two different stories. Young viewers will see Nicholas’ enchanting journey to Elfhelm. Adults willcatch a storyline involving national security: after the kidnapping of a youngster, the elves create a police state based on fear of outsiders. The elves’ leader (Sally Hawkins) even cracks down at home, banning activities that “let their guard down” and ruthlessly punishing dissenters. Kids won’t see it, but this is a story about balancing security and liberty in a post-9/11 world.

Despite the meaty subjects, A Boy Called Christmas rarely gets preachy. The action moves briskly along, there is some humor to leaven the tale, and Nicholas’s talking mouse, Miika (voiced by Stephen Merchant), steals the show. The all-star cast are clearly enjoying their roles and young Henry Lawfull provides a suitably soulful Nicholas. This isn’t the Christmas story you will expect but that doesn’t mean it won’t be the surprise under the tree that you come back to again and again.

Watch the trailer for A Boy Called Christmas

Violence: A man swings an ax at a mouse. A character is seen falling to his death. There’s mention of a woman being eaten by a bear. A bear chases a man and child. A boy is chased by a wounded reindeer. A kidnapped child is seen in a cage. A child is tied to a tree for the night. A woman overworks and starves a child. A troll is given a leaf that causes his head to explode (off screen). A woman uses a magical staff to float people off the ground and to blast a tree.
Sexual Content: None.
Profanity: None.
Alcohol / Drug Use:   None.

Why does Nicholas’s father make the choices he makes? What effect do those choices have on Nicholas? What are the consequences of Joel’s decisions? What does Nicholas learn from his father?

Why has life changed in Elfhelm? Do the changes make the elves safer? What do the elves learn from Nicholas? What does he learn from them?

This movie is based on a book of the same name, A Boy Called Christmas, by Matt Haig. For more books in the same story universe, you can read his novels, The Truth Pixie and A Mouse Called Miika.

There are other options for Santa origin stories. Klaus is an animated film featuring a reclusive toymaker and a desperate postmaster who work together to help the local town. In Arthur Christmas, the role of Santa is hereditary, passed from father to son. The current Santa will be succeeded by his eager, highly organized firstborn, but his second son Arthur seems feckless, until the time comes when he has to save Christmas for one child. A suburban dad unexpectedly assumes the role of the Big Guy after a Christmas Eve accident in The Santa Clause.

A reindeer uses her magical powers to help a lonely girl in Blizzard. A Reindeer’s Journey takes a documentary look at the real existence of reindeer in Finland. 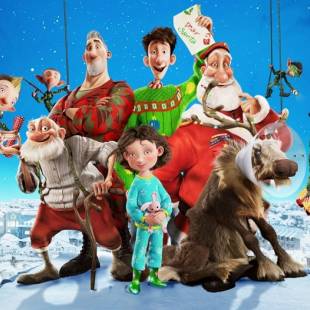