There are some big hits coming to Amazon Prime this month and a mix of old and new.

3:10 To Yuma A Civil War veteran agrees to escort a captured killer to trial. But the outlaw’s gang is determined to ambush the train and free their leader. Restricted. Grade: C+

Inception. In this sci-fi thriller, a man enters people’s dreams to steal secrets from their subconscious minds. But when he’s asked to plant an idea in a sleeping person’s mind, everything gets more difficult. PG-13, Grade: B-

Margin Call. Based on the 2008 financial crisis, this movie follows a day in the life of five investment professionals as they make critical judgment calls with global consequences. Restricted. Content warnings only.

Safe. An elite agent has his hands full rescuing a young girl and carrying secret intelligence. Restricted. Content warnings only.

Something’s Gotta Give. After Harry has a heart attack he discovers that his much younger girlfriend’s mother is more than meets the eye. PG-13, Grade: C-

Spare Parts. Four Hispanic students in Arizona are inspired by their teacher to enter an underwater robotics competition. PG-13, Content issues only.

Spider-Man 3. Toby Maguire stars as Peter Parker who’s struggling to balance his relationship with Mary Jane, the return of an old girlfriend, and the usual mixture of villains. PG-13, Grade: B+

Steel Magnolias. In the heart of Louisiana, six women get together at the beauty parlor to share their lives and support each other. PG, Grade: B+

The Holiday. Two women dealing with broken relationships decide that they can’t bear to spend Christmas alone. So they swap homes: the London reporter heads for southern California, and the movie trailer producer retreats to an English cottage. Neither woman knows that the holiday will give them both a fresh start. PG-13, Grade: C+

Top Gun. Tom Cruise stars as a hotshot pilot whose inner demons and rebellious attitude lead him to push his planes to their limits. PG, Grade: C+

Dora and the Lost City of Gold. Barely into her first year in a regular high school, Dora and some classmates have been abducted and taken to the jungle to rescue her parents and find a lost treasure city. PG, Grade: B-

The Peanut Butter Falcon. Institutionalized because of his Down Syndrome, Zak dreams of becoming a pro wrestler. One day, he escapes and runs into Tyler, who has his own reasons to run. The two embark on a trip downriver to find their freedom. PG-13, Grade: B+

Capone. Al Capone, most famous mob boss in the US, has been convicted and incarcerated. Now in ill health, Capone has been sent home to die. Restricted. Grade: D

The King of Staten Island. Scott has struggled to control his drug use while dealing with mental illness and family issues. Now that his sister has moved out and his mom’s dating again, Scott feels like the world has left him behind. Restricted. Grade: C-

The Cup. This soccer movie is set in Tibet and shows Tibetan monks playing soccer with a crushed Coca-Cola can. An irrepressible 13 year old monk wants one thing more than anything else – a satellite dish for a day so the monks can watch the World Cup finals. G, Grade: B+

Irresistible. A video of a retired Marine standing up for undocumented workers in Wisconsin grabs the attention of political operatives from both sides of the aisle. Now they’re converging on the Marine’s small town and turning the mayoral election into a national fight. Restricted. Grade: C

Chemical Hearts. This teen romantic drama centers around a 17 year old who’s never had a girlfriend and a new student with a tragic past. Romance blossoms as they work together on the school newspaper. This is an original Amazon production so our review will be released on its streaming date. Restricted. 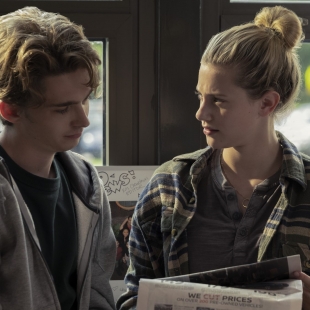