Don't believe everything you hear.

When his dog and cat start talking to him, Jerry (Ryan Reynolds) follows their advice, even though their killer suggestions are contrary to his placid personality.

Why is The Voices rated R? The MPA rated The Voices R for bloody violence, and for language including sexual references.

Why is The Voices rated R? The Voices is rated R by the MPAA for bloody violence, and for language including sexual references.

Language:
Approximately 30 instances of coarse and sexual language, including:
- Frequent use of the sexual expletive, most in a sexual context.
- Infrequent use of scatological slang and vulgar expressions.
- Limited use of slurs.

News About "The Voices"

Note: The Voices is opening in limited release.

From the Studio: Jerry (Ryan Reynolds) is that chipper guy clocking the nine-to-five at a bathtub factory, with the offbeat charm of anyone who could use a few friends. With the help of his court-appointed psychiatrist, he pursues his office crush (Gemma Arterton). However, the relationship takes a sudden, murderous turn after she stands him up for a date. Guided by his evil talking cat and benevolent talking dog, Jerry must decide whether to keep striving for normalcy, or indulge in a much more sinister path. Written by Lionsgate

The most recent home video release of The Voices movie is April 7, 2015. Here are some details…

Another man gets better advice when talks to his pet, a parrot named Paulie.

Related news about The Voices 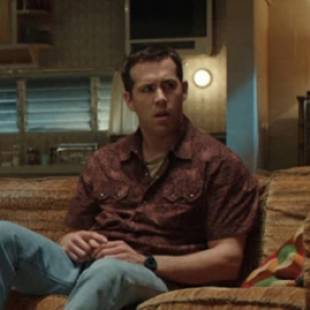