"Seventh Son" appears to have had lofty aspirations to be a grand adventure. But this outing is much more average than epic.

Witch hunting is a serious business for Master Gregory (Jeff Bridges), who uses all his medieval skills for the job. But to fight the evil Mother Malkin (Julian Moore) he will also need the help of his new apprentice (Ben Barns), a seventh son of a seventh son.

Finding a seventh son of a seventh son might be a little tricky today with the average fertility rate hovering around 1.9 children. Luckily larger families were in vogue in the medieval setting of this movie.

John Gregory (Jeff Bridges) is himself the seventh son of a seventh son. He’s also known as a spook or a knight who protects others from the evil witches, ghosts and boggarts that haunt the countryside. But Master Gregory, as he prefers to be called, is a little hard on apprentices. He lost his last one (Kit Harington) in a fiery encounter with Mother Malkin (Julianne Moore), the Queen of the witches. Now he needs a replacement.

Luckily for him, Master Gregory is drawn to an out-of-the-way peasant’s farm on the edge of a pristine mountain lake. (The scenery is the most spectacular part of the film.) There he finds Tom Ward (Ben Barnes) another seventh son of a seventh son. Tom, who recognizes Master Gregory from a recurring vision he experiences, has spent too many days slopping the family’s pigs and is ready for a new adventure. However he has yet to appreciate the work involved in being an apprentice.

Meanwhile Mother Malkin, who escaped from the cave Master Gregory put her in, is a little angry about her years of confinement. Now free of her prison, she summons all of the other sorcerers and evil spirits in the kingdom with plans to mount a full on attack against the humans. Unfortunately the fight is anything but fair since Mother Malkin’s cohorts have the ability to morph into huge and hideous monsters.

The warfare between the two groups involves endless scenes of swordplay and hand-to-hand combat with knives and spears. (There are some similar types of fights that take place between humans in a pub.) While most of the battles remain bloodless, there are other more disturbing scenes where characters are purposefully set on fire and burned.

Of course every adventure story needs a little romance and that happens when Tom meets Alice (Alicia Vikander). Being totally infatuated with the girl (something he didn’t see much of on the farm), Tom doesn’t seem to be disturbed after he discovers she is actually a witch sent to spy on him. Their budding relationship includes a couple of passionate kisses and a scene of cuddling in bed.

For the most part, Tom is a reluctant hero who whimpers his way through his early encounters with the evil ones. And the reasons for his sudden transformation into the man of strength he should be are a little vague. But Master Gregory introduces an entirely different set of issues for viewers. He has a comfortable relationship with his flask and appears to be slightly tipsy most of the time. Whether it’s the liquor or the unusual accent he takes on, you’ll have to listen closely to actually understand the dialogue of this lubricated nobleman.

Seventh Son appears to have had lofty aspirations to be a grand adventure—in the realm of Lord of the Rings or even The Chronicles of Narnia - Prince Caspian (one of Barnes’ other roles). But while the script contains the kind of “believe in yourself” messages we expect to find in a movie aimed at teens, this outing is much more average than epic.

Why is Seventh Son rated PG-13? Seventh Son is rated PG-13 by the MPAA for intense fantasy violence and action throughout, frightening images and brief strong language.

Violence: A woman is imprisoned in a cave. A child screams and rages after being possessed by an evil spirit. Characters engage in frequent fights, sometimes involving swords and knives. Others characters are beaten, stabbed, choked, impaled and burned. A few scenes depict blood. Some characters transform into monsters or other hideous beasts. A woman’s face is covered with scars after she is burned. A village is decimated and burned.

Sexual Content: A teen couple kisses and embraces several times. They are seen cuddling in bed, mostly clothed. A girl’s bare shoulders are seen while she is swimming in a lake.

Language: The script contains one use of the sexual expletive in a non-sexual context, along with infrequent mild cursing and profanity.

Alcohol / Drug Use: An adult character drinks frequently and often appears to be slightly drunk. He offers a swig to a teen character and he takes it. A man gives a teen a piece of “root” to use for his own enjoyment, although no depiction of its use is included.

Master Gregory says that with a little help most of life’s curses can be a gift. How can personal weaknesses become strengths? What is involved in changing them?

Master Gregory also says that Mother Malkin grew into what she was perceived to be. How does our treatment of other people affect the way they see themselves?

People can sometimes use the guise of love to get what they want from others. How does Alice use Tom when she asks him if he loves her? Who does she love more than him?

The most recent home video release of Seventh Son movie is May 26, 2015. Here are some details…

Ben Barns plays another fighter of evil in The Chronicles of Narnia - Prince Caspian and Chronicles of Narnia: The Voyage of the Dawn Treader. Jeff Bridges character mentors another youngster in Tron: Legacy. And a teen learns the art of magic in The Sorcerer’s Apprentice. 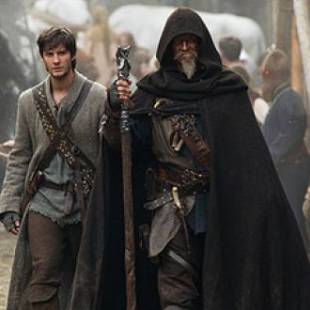