When a spoof becomes no laughing matter.

While on assignment in Iran in 2009, Newsweek journalist Maziar Bahari (played by Gael García Bernal) was imprisoned, questioned and tortured. One of the reasons his captors claimed he was a covert agent was because he had previously appeared on The Daily Show with Jon Stewart, in a comedy sketch featuring Jason Jones as a spy.

Why is Rosewater rated R? The MPA rated Rosewater R for language including some crude references, and violent content.

Why is Rosewater rated R? Rosewater is rated R by the MPAA for language including some crude references, and violent content.

Violence:
- Brief non-graphic violence.
- Infrequent portrayals of hand-to-hand violence in the context of torture and interrogation, with no blood or detail.
- Several scenes of violence depicting beating, shooting and rioting in the context of civil unrest, with some blood and little detail.
- Disturbing scenes.

Rosewater is opening in a limited theatrical release on November 14, 2014.

This movie is based on the memoir of the Iranian born, Canadian citizen Maziar Bahari, Then They Came for Me: A Family's Story of Love, Captivity and Survival (co-written with Aimee Molloy).

After his releases, Jon Stewart met with Maziar Bahari, and the two became friends. Stewart, who is known for his comedy depictions, decided to help Bahari adapt his serious account into this movie, titled Rosewater.

The most recent home video release of Rosewater movie is February 10, 2015. Here are some details…

Gael García Bernal can also be seen in Letters to Juliet. The Academy Award winning film, A Separation and the animation Persepolis are both set in Iran. 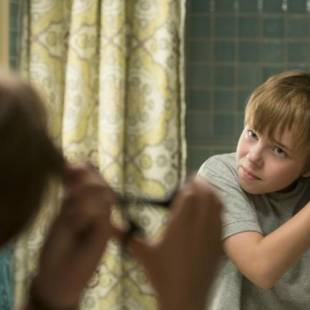