Theaters: Realizing that he's on the last of his nine lives, Puss in Boots tries to play it safe so as not to squander it. But his past catches up to him as he attempts to find a magical solution to his problem.

Violence B-
Sexual Content A
Profanity A-
Substance Use B

The legendary Puss in Boots (Antonio Banderas) has a problem; he’s used up eight of his nine lives. Now faced with his own mortality, and with a bounty hunter, Wolf (Wagner Moura), on his tail, Puss decides to retire to a cat rescue home to live out the rest of his days without adventure or risk. But when he’s given an opportunity to find the magical Wishing Star and wish for more lives, he jumps at the chance. Along with his old pal, Kitty Softpaws (Salma Hayek), and a wannabe therapy dog, Perro (Harvey Guillen), Puss sets out for the ultimate prize, but he’s not the only one who wants that Wish.

You know what kids today need? Stories about aging men grappling with their identity and facing their own mortality. No? Well, that’s what you’re getting with this Puss in Boots sequel. Yet, somehow, it really works. The themes around mortality are combined with messages about trust, friendship, optimism, and appreciating what you have, which results in a multi-layered story that is sure to resonate with both children and adults. There’s also a good balance of humor and heartfelt moments, which is hard to find in modern screenwriting.

DreamWorks has a very distinct house style of animation, both in 2D and 3D. One of the best aspects of this production is that it puts its own spin on that 3D style, by moving away from photorealism and into a more painterly, almost comic book style. The action scenes are for more interesting than in the previous Shrek franchise productions, and the colorful and fantastical settings are beautifully rendered. I do think DreamWorks could have leaned further into this style, but I suppose they didn’t want to vary too much from its predecessors.

Though I enjoyed the movie overall, I do think it’s going to skew to a slightly older audience than the first Puss in Boots film. The tone is darker, the themes slightly more mature, and some of the villains are relatively scary. The level of violence is also higher than expected, with background characters dying in various ways on screen, and Puss’s various deaths being shown. It still fits into its PG rating, but I would warn parents of very young children to be cautious, especially if you’re basing your expectations off of the Shrek films, which are far more lighthearted in their cartoon violence. That said, for older children and adults, I recommend this movie for a fun and surprisingly profound story about cherishing your life and the people in it.

Watch the trailer for Puss in Boots: The Last Wish

Violence: There is cartoonish fairy tale type violence throughout. Characters fight with swords, bows, knives, and scythes. A montage of Puss’s previous deaths is shown. Background characters are killed in various ways.
Sexual Content: None.
Profanity: Some mild insults. Bleeps are used over what could be swear words in a humorous manner.
Alcohol / Drug Use: A cat briefly acts drunk after drinking milk, with immediate consequences.

Why is Puss so determined to gain more lives? What does he learn about the value of his current life and how he spends it?

There are multiple books available about this classic fairy tale character. If it’s the story from the film you want to read, you can try Puss in Boots: The Last Wish Junior Novel by Cala Spinner. Also available in the DreamWorks universe is Puss in Boots: Amazing Tales by Max Davison and Chris Cooper, with illustrations by Egle Bartolini.

The original fairy story is told in Puss in Boots by Charles Perrault, translated from French by Malcolm Arthur. The lush, award-winning illustrations are by Fred Marcellino. A tongue-in-cheek version of the story is told by Philip Pullman and illustrated by Ian Beck in The Adventures of that Enterprising Feline Puss in Boots.

If DreamWorks visual aesthetic intrigues you, you can find a copy of The Art of Puss in Boots. Written by Ramin Zahed and with a foreword by Guillermo del Toro, this book provides intensive detail about the visual design of the first Puss in Boots film.

This is a sequel to Puss in Boots. The movies arise from the Shrek franchise, which consists of Shrek, Shrek 2, Shrek the Third, Shrek Forever After, and Shrek the Musical.

If it’s fractured fairy tales you’re after, there are plenty of animated options including Ella Enchanted, The Princess Bride, Hoodwinked, Happily N’Ever After, Red Shoes and the Seven Dwarfs, and Into the Woods.

Related news about Puss in Boots: The Last Wish 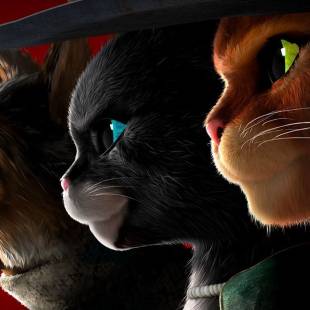