This Disney script hits the honey pot so accurately one may wonder if there wasn't some ghost from Pooh Corner directing this animation.

Piglet, one of the most diminutive animated characters to grace the screen, get his own movie in this Disney animation based on the classic Winnie the Pooh tales by A. A. Milne.

Expecting something big from Disney is one thing… but from Piglet? One of the most diminutive animated characters to grace the screen, the little porker makes Pikachu look like a pit bull.

Nonetheless, Piglet’s Big Movie gives the little guy front line billing, along with the usual gang from Pooh Corner—Eeyore, Rabbit, Tigger and the proverbial bear himself.

Since A.A. Milne has long since passed away, Disney screenwriters were left with the tall order of keeping the creator’s vision (and series) alive. On Pooh’s last two outings, The Tigger Movie and Pooh’s Grand Adventure: The Search for Christopher Robin, their effort fell short of the mark. But this time Disney has hit the honey pot so accurately one may wonder if there wasn’t some ghost from Pooh Corner directing them.

The first thing done right was deciding to revert to the tried and true Pooh formula found in The Many Adventures of Winnie the Pooh. Like that movie, this film treats us to three shorter segments glued together by a running narrative. Realizing they have forgotten to include Piglet in their daily plans, the friends set out to find him. While the search is in progress, the gang takes time to recall the fun memories they’ve enjoyed with their friend. These flashback stories about the origin of Eeyore’s house, the misunderstanding that happened when Kanga and Roo moved into the neighborhood, and their quest for the North Pole with Christopher Robin allow young audiences to view a movie in bite-sized pieces.

A moving musical score with songs written by Carly Simon emphasizes the heartfelt messages about friendship, motherhood, and prejudice. And just like the Pooh we grew up with, the lessons are subtle, yet complete. In the end you have a warm fuzzy feeling—one that was shared by the packed theater of young people I screened this movie with, who expressed their appreciation with a rare round of spontaneous applause.

Piglet’s friends use his scrapbook to act as a map of memories. You may want to use this movie in your family as a way to encourage children to begin building their own books of memories through drawings, writings, and photographs.

One segment in this movie has the friends concerned about how Kanga treats her baby Roo because they don’t understand what Kanga’s pouch is used for. Do you ever misunderstand other people’s customs or “way of doing things?” Does your opinion sometimes change after you get to know them?

The friends learn how valuable their relationship with Piglet is after they think he is lost. Can you think of anyone you take for granted? How would you feel if they were suddenly gone?

Disney’s The Many Adventures of Winnie the Pooh is a movie featuring three segments based on A.A. Milne’s original stories. 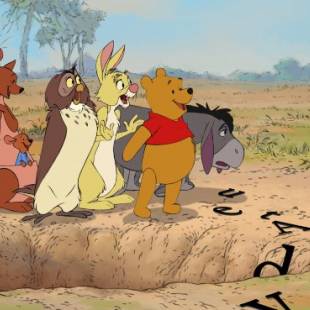