Most viewers will agree with the film's overarching themes but might not concur with the means used to reach the desirable ends.

Netflix: Appalled by the pervasive sexism in her high school, Vivian anonymously publishes a zine that sets off a cascade of unexpected events.

Why is Moxie rated PG-13? The MPAA rated Moxie PG-13 for thematic elements, strong language and sexual material, and some teen drinking.

Excited to begin junior year, Vivian and her lifelong best friend Claudia (played by Hadley Robinson and Lauren Tsai) are stunned to learn that the boys in their class have already started ranking the girls based on their sexual desirability and anatomy. Vivian and Claudia are half appalled, half fascinated by the process and it’s only when a new student is labelled with shocking crudity that Vivian has an epiphany, suddenly seeing the rankings for the demeaning and destructive tools they really are.

As Vivian’s perspective broadens, she becomes increasingly dissatisfied with the treatment of girls at her school. Male entitlement, casual sexism, underfunded female sports teams – all spark her ire. Finally, Vivian has had enough and blends rage with art to produce “Moxie”, a zine that she photocopies and distributes in the girls’ washrooms at school. Electrified by the issues Vivian raises in the zine, girls found a Moxie club and set out to expose and eliminate the misogynistic elements in their school culture. But change never comes easily…

Film critics always bring their own biases to a movie and I have to confess that my own background puts me firmly in Camp Vivian. In elementary school, I launched a successful petition to give girls ice time on the school skating rink which was reserved for boys. As Vivian and her friends advocate for funding and recognition for the girls’ soccer team, I can feel my seven year old self cheering them on.

I suspect that most parents and teens will agree with Team Moxie’s overarching goals – a school where girls are treated with respect and equality and where they don’t have to put up with demeaning language, sexual harassment, or sexual assault. Where we are likely to part ways is with tactics. I am fully on side with non-violent protests, but I can’t condone it when Vivian stoops to theft and vandalism – and I suspect adult viewers will agree with me.

Parents are also likely to be less than enthused by some of the movie’s negative content, particularly scenes of adolescent alcohol consumption and intoxication. Teen sexuality also gets screen time with Vivian and her boyfriend making out in his car while discussing future sexual activity. And whether or not you find the scene where they sneak into a funeral home and snuggle in a casket amusing or creepy is a matter of personal taste. Personally, I found it off-putting, but your opinion may differ.

Despite its negative content, Moxie has the potential to act as a great conversation starter with teens. It touches on so many issues – misogyny, sexual harassment, assault, racism, inequality – that parents need to discuss at home. It encourages teens to “be the change”; to act instead of complaining about inequality. And although this movie sometimes feels like it’s checking off a “woke checklist” it still provides a strong story, likeable characters, and plenty of space for big picture thinking. That’s a big plus in a movie aimed at adolescents.

Watch the trailer for Moxie

Why is Moxie rated PG-13? Moxie is rated PG-13 by the MPAA for thematic elements, strong language and sexual material, and some teen drinking.

Violence: A girl has an alarming nightmare where she’s apparently being chased in the woods. A male character spits in a girl’s can of coke. A guy slaps a girl’s backside. There is mention of a girl being raped.  A main character vandalizes a high school building. A teen trips another, unintentionally breaking his arm.
Sexual Content: Characters discuss “banging” other people. A teen takes off his shirt, throws it at a girl and makes a suggestive comment. Characters joke about a fictional affair. A teenage boy and girl kiss. A teenager jokes about being pregnant. Two teenage girls kiss. A teen boy and girl make out in the back seat of a car and have a non-explicit discussion about future sexual activity. A guy puts his hand on a girl’s chest. There is mention of a girl being raped.
Profanity:  The movie contains a dozen scatological curses, about 15 terms of deity, and an assortment of crude anatomical terms as well as demeaning words for women and lesbians. A single sexual expletive is used. Stickers covered with an anatomical term are seen in significant numbers in a few scenes.
Alcohol / Drug Use: Teenagers are seen drinking alcohol at a party and becoming intoxicated. Teens play drinking games. A teen drinks alcohol at a time of emotional stress and gets drunk.

Are sexual harassment and other expressions of misogyny problems at your school? Have you experienced it? Have any steps been taken to remedy the problem? What can you do to help ensure a safe learning environment for everyone at your school?

For more information about the issues tackled in Moxie, check out these links.

The Washington Post: Teen boys rated their female classmates based on looks. The girls fought back.

The Atlantic: The Sexism of School Dress Codes

National Women’s Law Center: The Battle for Gender Equity in Athletics in Elementary and Secondary Schools

The New York Times: 45 Stories of Sex and Consent on Campus

The New York Times: It’s Not That Men Don’t Know What Consent Is

For a chilling look at the sexual environment of today’s teens, you can read Peggy Orenstein’s Girls & Sex: Navigating the Complicated New Landscape.

Teenage girls looking for inspiration can learn from the successes of other women who have fought back against sexism. Their stories were collected by Melissa de la Cruz in Because I Was a Girl. More remarkable women are depicted in Teen Trailblazers: 30 Fearless Girls Who Changed the World Before They Were 20 by Jennifer Calvert and Vesna Asanovic.

Today’s girls are encouraged to change the world in Clementine von Radics’ For Teenage Girls with Wild Ambitions and Trembling Hearts. Christian girls are given the same encouragement by Sadie Robertson in Live Fearless: A Call to Power, Passion, and Purpose.

The issue of workplace sexual harassment is tackled in Bombshell which is based on the real life scandal at Fox News.

Suffragette depicts the British women who fought for the vote and legal rights a century ago.

A group of British feminists, outraged by the sexism they face every day, decide to protest the 1971 Miss World competition in Misbehaviour.

Enola Holmes tells the tale of Sherlock Holmes’ younger sister. Played by Millie Bobby Brown, the feisty young woman runs away from home rather than accept the restrictive social expectations for woman that her brother Mycroft wants to impose upon her.

A young girl brings her crusade for female education to the attention of the entire world in He Named Me Malala. 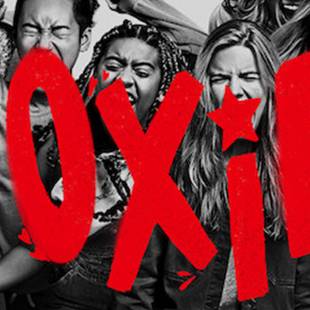