For audiences who want comedy without crudeness, this faith-based film is a great option.

How hard can it be for a couple of Dads (Sean Astin, Harry Shum Jr.) to watch their kids for a few hours so their wives can have a break? When Allyson (Sarah Drew) and her friends (Abbie Cobb, Patricia Heaton) take a well-deserved night out, the disastrous consequences prove just how difficult a mom's job can be.

Violence C+
Sexual Content A-
Profanity A-
Substance Use B-

I’m sure there is a marketing strategy behind Mom’s Night Out releasing so closely to Mother’s Day. Despite all the flowers, cards and sappy commercials, that second Sunday in May is the one day of the year that makes many women question if they’ll ever live up to the ideal of the perfect parent. Luckily, this movie reminds women that you don’t have to be perfect to still be a good mom.

All Allyson (Sarah Drew) wants is a reason to dress up, a nice dinner and some uninterrupted adult conversation with a couple of girlfriends. It’s not that she doesn’t love her husband (Sean Astin) or their three children. She’s just itching for a much-needed evening out with her friend Izzy (Logan White) and the preacher’s wife Sondra (Patricia Heaton).

To his credit, Allyson’s husband is supportive of the idea. But as a businessman who is more frequently on the road than at home, he’s a little nervous about caring for the kids on his own. Luckily, in spite of Allyson’s reservations, he talks his friend Kevin (Kevin Downes) into helping him. (Kevin is one of those perpetually adolescent males who plays video games and tosses around kitchen knives.) Izzy’s husband (Robert Amaya), on the other hand, is a blithering bundle of nerves who is sure he’ll maim (or worse) the couple’s twins. And Sondra might be past the stage of toddlers in diapers, but she is now dealing with teen trauma.

Unfortunately the ladies’ night out ends up being a lot more like Date Night than Sex and the City. Their dinner reservations are for the wrong weekend, their cell phones repeatedly ring with updates from home and then they run into Allyson’s demanding sister-in-law Bridgette (Abbie Cobb) at the bowling alley. That’s when they discover Bridgette’s childcare arrangements are not as secure as she thought. Her boyfriend has left the couple’s baby boy with someone called Bones (Trace Adkins) at the local tattoo shop. Still wearing their dresses and stylish bowling alley oxfords, the four women hire a cabbie (David Hunt) and begin what turns into a manhunt for the missing child. Eventually the evening ends in jail where Sondra is accidentally tazered.

To be sure, these women’s adventures are exaggerated, as are the misadventures of their husbands at home with the kids. (But what comedy isn’t full of hyperbole and embellishment?) However, for audiences who want comedy without crudeness, this faith-based film is a great option. In no ways does it try to proselyte to the unbeliever—the movie is merely a comedy about coming to appreciate the important role of a mother (whether religious or not) in a world where parenting isn’t always easy or appreciated. It also reaffirms that along with those Hallmark moments are the realities of life when kids draw on walls, try out their cooking skills in the kitchen and create complete havoc within minutes of getting out of bed.

Yet who is better than a woman to reassure another mom that things will eventually get better—even if it takes a year or so? Filmmakers Andrew and Jon Erwin invited their wives’ input while making this film—and it shows. There is a certain authenticity to some scenes that only women who have been there will understand. And thanks to strong directing, editing and great performances from the main cast, Mom’s Night Out gives audiences plenty to laugh at without having to settle for off-colored jokes and suggestive humor.

Violence: A woman accuses her husband of playing violent video games. A little boy is shown playing a shooting game. A bird is accidentally killed. Some characters scuffle. A man is shown with a gun. A man is punched in the nose and another is head-butted. Characters drive recklessly through the city. A man suffers a bloody nose. A woman is accidentally tazered in a police office. One character is pepper sprayed and another is hit by a car. A babysitter pulls out a big kitchen knife while taking care of children.

Language: A mild profanity is heard.

Alcohol / Drug Use:A woman is caught holding an armful of empty alcohol bottles. Characters are shown with cigarettes. A man appears to be under the influence of alcohol or drugs.

Allyson dresses up to go out with her friends. How does her husband react? Is it important for a wife to dress up for her husband as well? Why can it be do difficult to find date time after a couple is married?

Allyson is encouraged to find joy in chaos. Why can it be easy to get caught up in the every day challenges and miss out on the joy of motherhood? Why are many women so competitive with each other? Or with themselves? What does this script say about “being enough”? Is that idea easier to say than to act on?

Allyson and Izzy invite Sondra to join them for a girls’ night out. What are some of the advantages of having friends who are a different age or in a different parenting stage? What does Sondra do to encourage the young mothers?

Trace Adkins, who appears in this movie, is also a well-known Country Music singer. One of his songs, You’re Gonna Miss This, echoes some of the messages presented in this movie.

Learn more about the creative decisions behind the film in: Director Finds Religion “Just Fits” In Moms’ Night Out

The most recent home video release of Moms’ Night Out movie is September 2, 2014. Here are some details…

Moms’ Night Out releases to home video on September 2, 2014.

Disaster follows a couple when they try to get away together for a Date Night. Looking after kids is harder than it appears, or so learns a spy in The Pacifier, an aunt in Raising Helen and some grandparents in Parental Guidance.

Related news about Moms’ Night Out 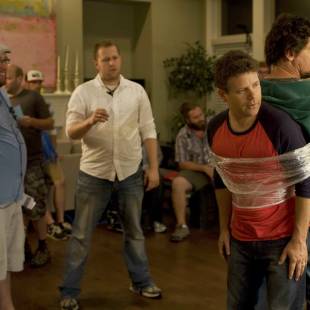