Even with payloads of action, humor and an edge-of-your-seat plot, "Gravity" may still be nothing more than a good, old-fashioned popcorn flick. But at least it's a really, really good one.

When space debris unexpectedly damages the shuttle, it puts the astronauts lives at risk. One left drifting in space (Sandra Bullock), has to rely on the voice of another (George Clooney). Yet both know the gravity of their situation and the real possibility that they may never return alive to Earth.

Violence C+
Sexual Content A-
Profanity D+
Substance Use B

Gravity is as close to space as most of us will ever get. And frankly after watching what happens, all I can say is thank goodness for that. This is one thrill ride that gives audiences new awe for space—and the dangers that lurk there.

Sandra Bullock plays medical engineer Ryan Stone in a role that puts her on a trajectory for another Oscar. George Clooney takes on the role of astronaut Matt Kokwalski, a man with swagger and a hint of sexism. They, along with Shariff (another crew member played by Paul Sharma), are outside the shuttle making repairs when the ship is bombarded with space debris from a detonated satellite. The metal shards rip the ship apart instantly killing the payload crew inside and blasting a hole through Shariff’s helmet and face. The rubble knocks loose the space arm Ryan is attached to and sends her careening through space. The storm of wreckage also collides with transmission satellites around the globe, causing telecommunication blackouts down on Earth and leaving the astronauts flying blind.

While the 3D images of the assailing space junk will leave the audience flinching, Bullock’s hyperventilation will also make them want to gasp for breath. The director’s use of breathing becomes one of the best elements in the entire film for depicting the severity of the ordeal. By contrast, Clooney’s character controls his respiration, taking what seems to be an overly relaxed attitude toward their predicament. He proves he knows how to keep his head in the middle of a crisis.

This is a survival story—a kind of Cast Away in space. However, in orbit oxygen is an exhaustible commodity. Temperatures fluctuate wildly. Rescue missions are hard to mount on a moment’s notice. And though Ryan is a person who craves silence, the lack of sound in space becomes too much even for her. It’s that sense of isolation and aloneness that adds to the tension of the story.

With outstanding cinematography, sound editing and special effects (including prolonged shots of weightlessness), Gravity is a technically strong production. Still, it takes more than technical elements to make a riveting storyline. Carrying the weight of the film on her shoulders, Bullock doesn’t have the option of relying on interactions with a lot of other characters. Fortunately she mans the ship well on her own. Yet the intensity of the story’s action (along with numerous profanities) makes this space voyage a better choice for older teens and adults than young aspiring space travelers.

Despite the gravity of the situation, perseverance, personal sacrifice and ingenuity keep these survivors grounded in their efforts to get home—an odyssey that encounters impossible odds. Even with payloads of action, moments of humor and an edge-of-your-seat plot, Gravity may still be nothing more than a good, old-fashioned popcorn flick. But at least it’s a really, really good one.

Why is Gravity rated PG-13? Gravity is rated PG-13 by the MPAA for intense perilous sequences, some disturbing images and brief strong language.

Violence: Intense scenes of accidents in space include depictions of explosions, space debris, shuttle damage, corpses and a grotesque image of an accident victim. Characters are subjected to frequent peril in a survival situation. Characters experience distress and impending death.

Sexual Content: A man talks briefly about a homosexual couple.

Alcohol / Drug Use: A characters takes a swig of vodka he finds inside a space capsule.

Several satellites are destroyed knocking out telecommunications on Earth as well as with the scientist. How much space debris orbits our earth? What are the dangers of growing amounts of garbage in space? What could result from the destruction of communication and security satellites?

How does isolation contribute to the tension in this movie?

For information on what is really happening in space, check NASA’s site at http://www.nasa.gov/news/

The most recent home video release of Gravity movie is March 31, 2015. Here are some details…

A real life space disaster is dramatized in the movie Apollo 13. A group of exceptional children attending Space Camp also get stranded in orbit above the Earth.And a rescue Mission to Mars causes astronauts similar life threatening situations. 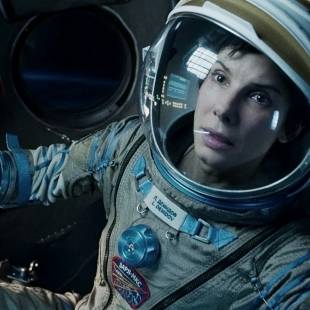