Fly Me to the Moon Parent Guide

The lure of exploring space is not only enough to ignite the imagination and determination of mankind -- it has also sparked the lively interest of three adventurous houseflies (voices of Trevor Gagnon, Phillip Bolden and David Gore). Hitching a ride with the human astronauts (the real Buzz Aldrin voices his animated counter-part), the little insects travel aboard Apollo 11 on its historic voyage to the moon.

Violence B
Sexual Content A-
Profanity B+
Substance Use B-

On the surface, this 3D animated film about three young houseflies stowing away on the Apollo 11 spacecraft delivers a mediocre experience that should keep most kids entertained—at least until the Russians show up. But that’s the end of the story… first the beginning…

Nat, IQ and Scooter (voices of Trevor Gagnon, Philip Daniel Bolden, and David Gore) are three curious houseflies living only a short flight from Cape Canaveral. For years they have observed the humans taking to the heavens in their rocket ships, and now they are determined to explore the outer reaches—especially after Nat shares a talk with his grandfather (voice of Christopher Lloyd) who loves to retell his travel across the ocean with Amelia Earhart.

Sneaking away from the sleeping relatives early one morning, the three flyboys worm their way into the heart of NASA’s Apollo operations center and a few hours later are riding a rocket to the moon. Back on Earth, the boys’ mothers are fretting over the fate of their offspring while Grandpa offers stoic reassurance. Meanwhile, on the other side of the planet, Russian flies within the Kremlin aren’t pleased at seeing their US species on television (they must have had some of the first HDTVs available!). Using their “man” on the inside, they plan an espionage plot with the hope of causing havoc with the historic mission—and make for a rather long diversion before the 3D movie’s expected conclusion.

Aside from the sense of depth (which had little hands in the screening I attended reaching out to touch objects) the visual imagery of this film is sparse compared to recent higher budget offerings. And while creators went to great lengths to recreate NASA spacecraft and control rooms, don’t expect to see much respect for science in this script. For one, astronauts didn’t have an aerosol can of bug spray in the command module. Thankfully, Buzz Aldrin (one of the real Apollo 11 astronauts) drops in before the credits roll to remind young audiences that a housefly would never have passed the sterile conditions needed within the capsule, let alone survived in outer space.

Of course hardly anyone comes to an animation expecting a good dose of reality, yet this movie is strangely humor-impaired as well. The timing of lines and editing between scenes has a clunkiness that leaves the few gags in the movie gasping for air. The script also has a well stocked pantry of stereotyped characters: spectacled smart kid, burping fat kid, bad Russians and females who are unable to do anything except faint and follow the lead of men.

Other content is minimal—although it may still be a concern when reflecting upon the very young audience this production is aimed at. Grandpa asks his grandson if he knows any “hotties” and discusses a relationship he once had with a Russian woman who could “sure put away the vodka.” Another character often exclaims, “Lord of the flies!” and a couple of bugs talk about eating “crap” in a ball of dung. As well there are jump scenes, moments of tension, and a very 3D sneeze and burp.

Considering the monumental effort that likely went into getting this movie off the ground, it’s unfortunate the final result doesn’t fly higher. Aside from Astronaut Aldrin and the cast of insects, there isn’t much other “buzz” worth mentioning.

Squarely aimed at young audiences, this animation will only play in theaters with 3D capabilities. Content concerns are relatively minimal, but considering its young age appeal there are issues of which parents will want to be aware. A Grandfather character tells a joke about differentiating between male and female files by noticing which ones are on a beer can. He also talks of a relationship he had with a Russian woman who could “sure put away the vodka” and asks his grandson if he knows any “hotties.” A fictitious TV stations has the call sign “DCUP- TV”. Scenes of mild tension are included along with one “jump” moment when a dog lunges at the flies. Two male characters, one American and the other Russian, get into a physical altercation with punching and pushing until one is thrown against an object. Many characters fall into well-worn stereotypical categories—a young obese character eats obsessively and burbs, a young smart character wears spectacles, all Russian males are bad (their commander’s name is Poopchev), and females play a very secondary role to the male decision makers. One character exclaims “Lord of the flies” a few times. An ashtray full of cigarette butts is seen.

Fly Me to the Moon Parents' Guide

The flies in this film reminisce about the years past. In reality a housefly is lucky to live a month. For more information on this common insect, check this link: http://en.wikipedia.org/wiki/Housefly

For the real story on the Apollo Program, that eventually became the greatest moment in modern exploration history, check this section of NASA’s web site: http://www.nasa.gov/mission_pages/apollo/index.html

The most recent home video release of Fly Me to the Moon movie is December 1, 2008. Here are some details…

You can learn all about the moon missions from the astronauts themselves in the documentary In the Shadow of the Moon. The story of the dramatic flight of Apollo 13 has been turned into a movie. The thrill of space exploration is the imaginative spark behind such sci-fi series as Star Trek and Star Wars.

Related news about Fly Me to the Moon 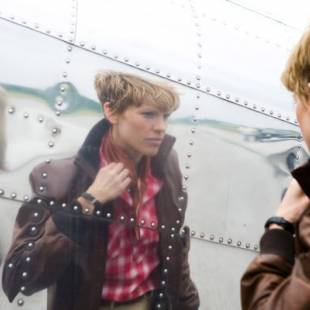