This is a brilliant, audacious, glossy production, wrapped around a whole lot of anti-social messages.

Disney+: The story behind Cruella DeVil, the flamboyantly cruel fashion aficionado in "101 Dalmatians".

Violence C
Sexual Content A
Profanity A
Substance Use C

Why is Cruella rated PG-13? The MPAA rated Cruella PG-13 for some violence and thematic elements

“Brilliant, bad, and a little bit mad” is Cruella De Vil’s assessment of herself and generations of Disney fans are sure to agree. Notorious for her obsessive desire to kidnap Dalmatians and turn them into dog skin coats, Cruella has never been a sympathetic character. Until now.

As it combs through its catalogue, Disney is getting maximum mileage from familiar stories and characters. The Mouse House has produced not one but two stories rehabilitating Maleficent from her draconic role in Sleeping Beauty, turning her into a sympathetic guardian of nature and defender of diversity. Now the studio’s story geniuses have whipped up a backstory for Cruella – but the results are far more morally ambiguous than for the horn-crowned Maleficent.

The movie begins with young Estella (played by several child actors) - clever impulsive, and distinctive for her black and white hair. Her mother keeps telling her to “be Estella not Cruella”, the name they have given her hot-tempered alter ego. Estella tries her best, even when her mother dies and she runs away to London, blaming herself and grieving. For a decade, Estella (now played by Emma Stone) and her friends, Jasper and Horace (Joel Fry and Paul Walter Hauser), support themselves with petty theft, although Estella never stops dreaming about becoming a designer. Then she gets her big chance, going to work for the Baroness (Emma Thompson), head of the city’s top fashion house. The Baroness is glamorous, heartless, and ruthless and pretty soon Cruella re-emerges, ready to upstage her boss with her own avant-garde fashions and wild publicity stunts. But Cruella has more than just professional one-upmanship in mind…

Cruella is a brilliant spectacle to watch. It’s packed with drama and excitement, the visuals are excellent, and the costumes are a work of art. Cruella and the Baroness both have exquisitely detailed wardrobes that reinforce their characters, accelerate the story, and make fashion aficionados drool. Throw in an irresistible 1970s soundtrack, and this is the kind of movie you want to see in theaters, if the coronavirus epidemic is under control in your area. If not, watch it on the biggest screen you have at home. Please, please don’t watch it on a phone.

Where you watch Cruella is less important than who you watch it with – it’s definitely not suitable for children. The movie is rated PG-13 and that rating should be taken seriously. Not only does the show contain lots of violence – murder, attempted murder, and arson, for a start – but it shows main characters drinking alcohol and even becoming intoxicated. On top of that, the film frequently excuses assault, theft, revenge, and other anti-social behaviors, sometimes using them as comic fodder. This is a dark film with an angry anti-hero as a protagonist, and it attempts to make her reckless, sometimes violent behaviors sympathetic.

The movie also has a few other flaws. At over two hours, it’s far too long and definitely needs tighter editing. And setting a prequel decades after the original is a time-bending exercise that feels unnecessary. The 1970s aesthetic is fun, but the film would have been just as effective set in the 1950s – and Cruella’s outrageous fashions even more disruptive.

Flaws aside, Cruella qualifies as a guilty pleasure. If you’re having a bad day and want to get a vicarious thrill from watching a whole lot of rule-breaking, this movie will fit the bill. It’s exciting, audacious, and a bit unnerving. Hopefully your teens won’t see it as an aspirational tale…

Watch the trailer for Cruella

Why is Cruella rated PG-13? Cruella is rated PG-13 by the MPAA for some violence and thematic elements

Violence:  There are frequent scenes of a girl being bullied at school: she’s pushed and dropped from a height. She responds by punching and throwing a ball at a boy’s crotch. A dog bites a man’s ankle. People are repeatedly knocked to the ground by overzealous security guards. Fierce dogs menace people in several scenes. Dogs jump people. A woman sets fire to her own cloak for dramatic effect. A woman retaliates violently when grabbed by security guards. There are frequent scenes of vehicle theft and reckless driving, resulting in multiple collisions. Dogs are kidnapped. People are swarmed by insects. A woman discusses making coats from dog skin. Characters are tied up. A person commits arson, leaving someone to die. A character steals a vehicle and drives it through the doors and walls of a police station. Spoiler warning: A woman is heard ordering the disposal of her newborn child. There are scenes of people being pushed over a balcony to their deaths.
Sexual Content:   There is a brief scene of a woman in labor: she is screaming.
Profanity: A minor swear word is seen on a sign.
Alcohol / Drug Use:  There are frequent scenes of main characters drinking alcohol in social settings. A minor character consumes alcohol on the job. A main character is shown drinking hard liquor straight out of the decanter and is shown drunk and later on, hungover. A few people are briefly seen smoking.

Does this movie change how you feel about Cruella De Vil? Why or why not? Do you think she’s a villain or a victim?

The book that started it all is The Hundred and One Dalmatians by Dodie Smith. She also wrote a sequel entitled The Starlight Barking.

If you want this movie’s version of the story in novel form, Disney Books has published Cruella, written by Elizabeth Rudnick. Also based on this plotline is Hello, Cruel Heart by Maureen Johnson. This YA novel focuses on Cruella’s teenage years.

For Cruella’s side of the story (which is completely different from the film), try Evil Thing by Serena Valentino, the seventh novel in Disney’s Villains series.

Cruella De Vil first appears in film in Disney’s animated 1961 version of 101 Dalmatians. There is also a live action version with Glenn Close as Cruella and she appears in its sequel, 102 Dalmatians. 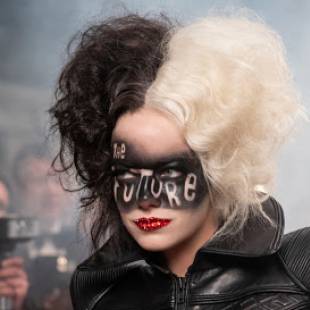 A Castle for Christmas

A Castle for Christmas