This intense action may be too much, especially for fans that are still young enough to wear Spider-Man pajamas. But Peter manages bring hope to the people of New York and show compassion.

Spider-Man (Andrew Garfield) finds his amazing powers not quite as super as he hoped when he tries to unravel the secrets behind the mega-company OsCorp, and faces off against enemies old and new.

Violence C
Sexual Content A-
Profanity B
Substance Use C+

Andrew Garfield may be amazing as Spider-Man, but even more incredible is the fact the spandex-wearing Marvel Comic superhero has shown up on the big screen in his own movie five times in the last dozen years. Take that Iron Man!

After assuming the role from Tobey Maguire, Andrew Garfield fills out the suit for the second time as Peter Parker in The Amazing Spider-Man 2. Having just graduated from high school, Peter has come to grips with his supernatural powers and the ability he has to help others. The public however is still split on how they feel about him.

Regardless of more personal peace, what Peter continues to struggle with is the sudden disappearance of his parents (Embeth Davidtz and Campbell Scott) and the stories circulating about them. His Aunt May (Sally Field) keeps a tight lip whenever he asks her questions, yet he feels a gnawing need to uncover the truth about his father’s role at OSCORP.

Peter is also in a complicated romance with Gwen Stacy (Emma Stone). While he thinks he can’t live without her, he is nagged by the promise he made to her dying father—that he wouldn’t allow anything to harm her. And that’s a problem because Spider-Man seems to attract trouble like flies to a spider web.

In this movie, Peter’s first unwanted nemesis is Electro. Before he was a super villain, Max (Jamie Foxx) was an unassuming and unnoticed engineer working at OSCORP. Then, thanks to a work place accident where was electrocuted before falling into a vat of eels, Max was reborn with blue skin and shocking personality. Now as Electro, he stands out in a crowd and he wants to make sure everyone, including Spider-Man, will take notice of him.

Also in the wings is Peter’s old friend Harry Osborn (Dane DeHann) who has just inherited the leadership role at OSCORP from his fatally ill father. Unfortunately Harry shares the same genetic defect as his Dad and is determined to find a way to stay alive even if it means giving in to less-than-ethical means.

The onslaught of problems generated by these characters, along with a variety of other miscellaneous evils, keeps Spider-Man swinging from one skyscraper to another in an attempt to keep the public safe. His crime fighting involvement results in plenty of brutal fistfights, wild car chases (that appear to decimate the NYPD’s fleet of cruisers) and frequent gunplay in the city’s streets. Meanwhile, Electro takes tazing to a whole new level when he begins electrocuting anyone who crosses him. People are also choked, burned and transformed into gruesome figures.

This intense action may be too much—especially for fans that are still young enough to wear Spider-Man pajamas. But despite his young years, Peter manages to bring hope to the citizens of New York. As well he shows compassion for his family and friends. And for a boy who has the entire city to protect from bad guys like Electro, the Green Goblin and the metallic Rhino, that may be the most amazing ability of all.

Violence: A woman is shot. Characters struggle and are choked and beaten (some bloody injuries are shown). One man is sucked out of a plane. A plane crashes killing the occupants. A character drives wildly through downtown crushing cars and destroying property. Police and criminals exchange gunfire frequently. A character is hit by a car. A father and son argue. Frequent scenes of electrocution and property damage are shown. A man is shocked and then falls in a vat of electric eels. A man is threatened with a knife. Explosions occur. A character undergoes a gruesome transformation. Planes nearly collide in midair.

Sexual Content: Brief scenes of kissing and embracing are shown.

Language: The script contains some mild curses and profanities, along with occasional slurs.

Max is rarely noticed by anyone else in the company. Why is it so important for people to feel recognized by others? How does he react once he has his superpowers?

Some of the citizens of New York consider Spider-Man’s crime fighting efforts to be an intrusion instead of helpful. They say he should let the police do the work. Can individual’s involvement in the community help make their neighborhood a safer place? Why are some people hesitant to become involved in other people’s lives? Do they worry about their own safety or the time it will take? Can a lack of participation in the community make it feel like a more dangerous place to live?

The most recent home video release of The Amazing Spider-Man 2 movie is August 19, 2014. Here are some details…

- The Wages of Heroism: Making The Amazing Spider-Man 2

This movie is the sequel to The Amazing Spider-Man. Tobey Maguire played the super hero in the movies Spider-Man, Spider-Man 2 and Spider-Man 3.

Related news about The Amazing Spider-Man 2 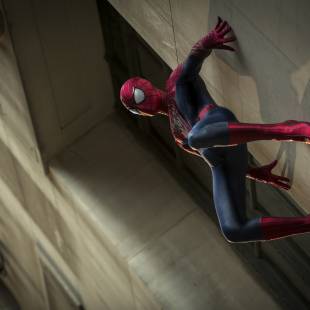