In honor of the 50th anniversary of My Fair Lady, the musical is releases to home video (Blu-ray/DVD Combo Pack) on October 27, 2015. For those of you who can’t get enough of Audrey Hepburn, this is a great chance to see the great actress. Rex Harrison is no slouch either, although his rendition of Henry Higgins is a lot like the character he plays in Doctor Dolittle—not to be confused with Eliza Doolittle—the name for the leading lady in this film…

According to Paramount’s promotional information, this release offers a “brand new 4k restoration from an 8K scan of the original negative, and other surviving 65mm elements, painstakingly restored by acclaimed film historian and preservationist Robert A. Harris”.

Included in the package are “90 minutes of special features including a variety of original trailers and featurettes that were used in theaters to promote the feature film, as well as footage from the film’s Los Angeles and British premieres in 1964.”(Also quoting Paramount Pictures.)

So warm up the home theater and get ready to feel like you could have danced all night….

Wouldn't it be loverly... 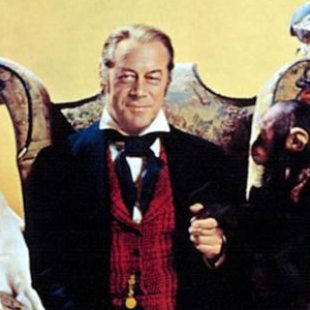