The measured pace at which the story unfolds may lose the interest of younger audience members. Still, older viewers will appreciate the real purpose of Maria Altmann's battle.

During WWII, Maria Altmann's (Helen Mirren) family was forced from Austria, and the possessions they left behind were confiscated by the Nazi's -- including a portrait of her aunt by the famous artist Gustav Klimt. That was over fifty years ago, so she thinks it is high time the painting was returned.

Violence B
Sexual Content A
Profanity C+
Substance Use B-

Helen Mirren has tackled the role of Queen Elizabeth. She’s played the long-suffering wife of Alfred Hitchcock. And now in Woman in Gold she takes on Maria Altmann, the Jewish refugee who fought the Austrian government.

As a young bride, Maria (Tatiana Maslany) and her new husband Fritz (Max Irons) fled their homeland as the Nazis commandeered the country. She left behind her mother (Nina Kunzendorf), her father (Allan Corduner) and every material possession she owned. Decades later, as a shop owner in Los Angeles, the widowed Maria approaches her friend’s son.

Randy Schoenberg (Ryan Reynolds), a struggling lawyer with a wife (Katie Holmes) and baby, has just found a job with a firm in the city. Maria asks if she can hire him on the side. She has letters belonging to her recently deceased sister, and in one of them is a note about several family-owned paintings that were seized by the Nazis. Since then the Gustav Klimt pieces, including one portrait of her Aunt Adele (Antje Traue) called the Woman in Gold, has hung in Vienna’s Belvedere Museum. But according to the letter, the artwork belongs to Maria. And she wants to know if her claim to ownership could stand up in court.

Randy initially refuses to help, until he discovers the paintings have an estimated value in the millions. Getting a leave from his day job, he travels with Maria to Austria where their request for the return of the masterpiece is summarily dismissed. However during their visit something changes for Randy. Standing in the Holocaust Museum, this great-grandson of Austrian Jewish composers Arnold Schoenberg and Eric Zeisl discovers his own connection to the past.

Like many Hollywood productions, Woman in Gold compresses the story’s timeline. In reality it took Maria years to work through the judicial system in the U.S. and receive an arbitration ruling in Austria. However, this script offers an inspiring story of perseverance in the face of delays, financial setbacks and international feuds.

In the film Maria’s childhood and young adult life are revealed through flashbacks that portray her close relationship with her aunt, the beginning of WWII and the humiliation endured by the Jews in her neighborhood. Also exposes are the mixed feelings of some modern Austrians toward Jews attempting to recover their belongings. One of her allies in the fight is a young Austrian journalist (Daniel Brühl) who struggles to come to terms with his own attitudes about the past.

This movie contains relatively few content concerns. Parents can expect brief scenes of street violence and comments about the Nazi interlopers, along with a handful of profanities and one strong sexual expletive. As well, characters are seen drinking in social settings. Yet the measured pace at which the story unfolds may lose the interest of younger viewers. Still, older viewers will appreciate the real purpose of Maria Altmann’s battle. It isn’t really about to regaining property. Unfortunately, what this woman truly yearns for something that can never be recouped—and that is the family she left behind.

Violence: Scenes of the Nazi invasion include Jewish people being threatened, humiliated and roughed up. A soldier fires shots at a young couple that is running away. Personal belongings are pilfered and household items are confiscated. Families are torn apart.

Language: The script contains a handful of mild curses and profanities, along with one strong sexual expletive used in a non-sexual context. Some vulgar expressions are used to intimidate others.

Alcohol / Drug Use: Characters drink in social settings or at home. A soldier smokes.

Woman in Gold is based on the true story of Maria Altmann’s efforts to regain possession of her aunt’s portrait. Learn more about the artist Gustav Klimt, and his painting of Adele Bloch-Bauer.

During her visit to Austria one man yells at Maria saying, “Not everything is about the Holocaust.” How might non-Jewish Austrians view the Nazi occupation differently than the Jews who lost their homes, families and lives? How do some present day citizens of Austrians portrayed in this movie deal with the guilt of what happened in their country’s past? Why does the young journalist feel like the sins of his fathers are on his shoulders?

Why is Maria worried that young people will forget about the past? Why does she insist that they visit the Holocaust Museum? Why does Maria initially refuse to go with Randy to Austria? What memories still haunt her?

The most recent home video release of Woman in Gold movie is July 7, 2015. Here are some details…

The theft of Europe’s great art treasures in also depicted in The Monuments Men. Danny Kaye offers a comedic take on trying to restore these stolen masterpieces to their rightful owns in The Secret Life of Walter Mitty -1947.

Related news about Woman in Gold 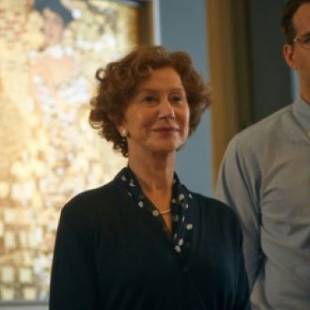