What We Do In the Shadows Parent Guide

It sucks, but even if you are a vampire, you still need to do life's everyday chores.

The life of an immortal vampire may sound glamorous, but for four such beings (Jemaine Clement, Taika Waititi, Jonathan Brugh, Ben Fransham), there are still lots of boring, everyday responsibilities that need to be attended to -- and roommate issues to be contended with.

What We Do In the Shadows
Rating & Content Info

Language:
Approximately 34 instances of coarse language, including:
- Frequent use of the sexual expletive, once is a sexual context.
- Infrequent use of scatological slang and vulgar expressions.
- Limited use of slurs.

News About "What We Do In the Shadows"

More About the Movie: Jemaine Clement is also known for his work (singing, acting and writing) in Flight of the Concords.

From the Studio: Follow the lives of Viago (Taika Waititi), Deacon (Jonathan Brugh), and Vladislav (Jemaine Clement) - three flatmates who are just trying to get by and overcome life's obstacles-like being immortal vampires who must feast on human blood. Hundreds of years old, the vampires are finding that beyond sunlight catastrophes, hitting the main artery, and not being able to get a sense of their wardrobe without a reflection-modern society has them struggling with the mundane like paying rent, keeping up with the chore wheel, trying to get into nightclubs, and overcoming flatmate conflicts. Written by Production

The most recent home video release of What We Do In the Shadows movie is July 21, 2015. Here are some details…

Jemaine Clement has lent his musical talents to Rio, Rio 2, The Pirates! Band of Misfits and Muppets Most Wanted.

Related news about What We Do In the Shadows 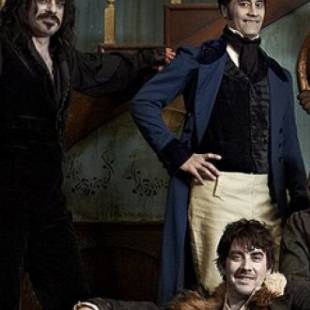