Something From Tiffany’s Parent Guide

While this film isn't an instant classic, its realistic characters and decent writing puts it a cut above most romance movies.

Amazon Prime: A young woman gets an engagement ring from her boyfriend, but the problem is, he didn't buy it. The ring belongs to another man, who comes into her life and leaves a lasting impression.

Violence A
Sexual Content A
Profanity C
Substance Use B

Ethan (Kendrick Sampson) is planning to propose to his girlfriend, Vanessa (Shay Mitchell), during a Christmas vacation in New York. While buying the ring, he witnesses another Tiffany’s customer, Gary (Ray Nicholson), get hit by a car. In the ensuing commotion, their bags accidently get swapped. On Christmas morning, Vanessa opens her gift to find a pair of earrings, while Gary’s girlfriend, Rachel (Zoey Deutch), receives an engagement ring. Realizing the mix up, Ethan tries to get his ring back, forging a connection with Rachel in the process, who is having second thoughts about her unexpected engagement.

One of the most frustrating things about romantic movies, Christmas or otherwise, is that the characters almost never act in rational, realistic ways. There are always wacky hijinks and ridiculous misunderstandings that would never happen in the real world. What I really appreciate about Something from Tiffany’s is that the situations and choices are all believable. The misunderstandings are realistic, and the characters are mature, reasonable adults. The romantic relationships are complicated, just like in real life. There are no flat stereotypes to be found here. All four main adult characters have distinct personalities, motivations, and flaws. That’s far more than can be said for 99% of the romance genre.

Although set during the holidays, Christmas doesn’t factor into the story too much and it doesn’t feel particularly festive. That’s not a knock against the movie, it’s just an observation for those searching for the most Christmassy of Christmas films. I appreciated that aspect, because it makes the film more suitable for year-round viewing, but some viewers may be disappointed in the lack of holiday-ness.

For a romance, the level of content concerns is lower than usual for the genre, making this a suitable option for a wider audience. There is no sexual content, short of a few kisses, and alcohol is only consumed in social situations, and not to excess. The only concern of note is the three dozen profanities in the script, which may or may not offend you, depending on your tolerance for mild expletives and terms of deity.

Although the leads have amazing chemistry and the story is realistic and well done, Something from Tiffany’s feels forgettable amongst the glut of Christmas romances. For fans of the genre, this is an above-par entry into the field, but even that is not enough to lift it into “instant classic” status.

Watch the trailer for Something From Tiffany’s

Violence: A man is hit by a car, though the actual impact is not seen.
Sexual Content: Adult couples kiss.
Profanity: The script contains 18 mild and moderate expletives and 20 uses of terms of deity.
Alcohol / Drug Use: Adults drink alcohol in social contexts. One joke about drugs.

Something From Tiffany’s Parents' Guide

What do the choices Gary makes say about who he is as a person? What about Ethan’s choices?

If you’re looking for more Christmas romances, check out Under the Mistletoe, a list of our reviews for recent seasonal rom-coms.

Related news about Something From Tiffany’s 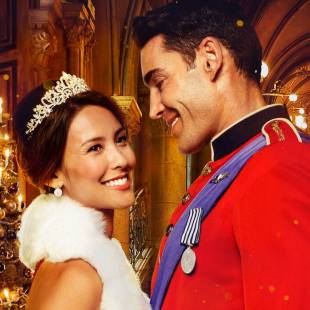