For all the smurfy fantasy and silly antics, this film does try to present positive messages -- but could still use a bit of guidance from a Parent Smurf.

In this third movie of the Smurf franchise, (formerly called Smurfs 3 or Get Smurfy - 3D) the mostly male characters discover another village of blue inhabitants -- and this group is mostly female. Of course the tiny populace also has must with the evil doings of their arch enemy Garagmel (voice of Rainn Wilson).

Violence B
Sexual Content A-
Profanity A
Substance Use A

If reading those auditory cues brings images of blue beings into your mind, then you are certainly familiar with the main characters in Smurfs: The Lost Village. Personally, the annoying theme song wakes up early morning memories of my first job, where I worked at a local TV station that aired The Smurfs at 8 AM. Yes, I need to exchange my Grouchy Smurf feelings for a little more Happy Smurf.

These days the critters from Smurf Village live on movie screens where they have been resurrected in 3D animated glory. While previous cinematic adventures (The Smurfs and The Smurfs 2) have mixed the drawn characters with live action humans, this episode is back to a fully animated effort.

In this production, the creators have acknowledged some of the problematic issues of an all-male society, minus one outlier. Smurfette (voice by Demi Lovato) is the only female in the sequestering, and she (gasp) is not a real Smurf. For those who haven’t studied the complete Smurf canon, the evil wizard Gargamel (voice of Rainn Wilson) created Smurfette in an attempt to lure the other Smurfs and harvest their magical powers. However, Papa Smurf (voice of Mandy Patinkin), the patriarchal leader of the community, used his spellcasting abilities to change her into the lovely Smurfette she is today.

This backstory is important because Smurfette is the spotlight character in this movie. She’s sad because all the other Smurfs have easily identifiable traits, which are reinforced by their adjective naming convention. Jokey Smurf (voice of Gabriel Iglesias) plays jokes, Nosey Smurf (voice of Kelly Asbury) spies on people, and Baker Smurf (voice of Gordon Ramsay) has nice buns. But who is Smurfette? Even Brainy Smurf’s (voice of Danny Pudi) amazing new machine can’t identify her true passions. Desperate to try new ideas and activities to discover who she really is, Smurfette ends up near the far edge of woods and meets something she never thought existed: another female Smurf.

Convinced there must be another village of Smurfs, she returns to solicit help from her friends Brainy, Clumsy (voice of Jack McBrayer), and Hefty Smurf (voice of Joe Manganiello). Knowing the highly protective Papa Smurf wouldn’t approve of Smurfette leaving the community, they secretly embark on their excursion. Of course, the nasty Gargamel is quick to interrupt their progress. Other adversaries present plenty of conflict as well, which may prove frightening for young viewers.

Smurfette’s meeting with her evil creator results in a morbid outcome that seemed a little shocking—even to this adult. The foray into the hidden forest also reveals plants that gobble Smurfs and other life forms, a dangerous river journey and a monster that needs to be tamed. And a moment of awkward sexual innuendo occurs between Papa Smurf and Smurfwillow (voice of Julia Roberts), that will hopefully be veiled enough to pass by children.

For all the fantasy and silly antics, this film does try to present a variety of positive messages. Female empowerment and the equal societal role of women are the mantra of the newfound colony. Frequent reminders of the importance of many characters contributing their unique skills is evident in the depictions of Smurf life. Yet the moral of the story appears a bit confusing when the Smurfs are chased by Garagmel down a rushing river. After their foe ends up floundering in the water and begging for a rescue, Brainy advises they leave him behind. But Smurfette feels a need to help her enemy and convinces the group to assist the now gargling wizard. Their offer of compassion turns out to be a bad decision.

All Grumpy Smurf attitude aside, families should be prepared to discuss the themes and role models presented by these blue imps. Portrayals of slapstick mayhem and practical jokes (usually initiated by Jokey Smurf) may need some adult direction to determine appropriate expressions of humor. Nosey Smurf, a frequent unwanted eavesdropper, will provide opportunities to discuss gossiping and keeping confidences. At the end of the day Smurfs: The Lost Village will likely be reasonably satisfying entertainment—especially if it comes with some Parent-Smurf guidance.

Violence: Characters are in frequent peril. An evil Gargamel, captures Smurfs and threatens them. This same wizard character often chases and attempts to abduct Smurfs. In one scene, the Smurfs rescue Gargamel from drowning only to have the revived wizard immediately attempt to drown them. Fantastic flowers and plants appear to eat and punch characters. Characters play tricks, some mean spirited, on one another. A character kicks another in the crotch. A monster appears in a “made you jump” moment. A fantastical weapon causes characters to become frozen.

Sexual Content: A moment of innuendo occurs between male and female Smurfs locked in a cage.

Drugs/Alcohol Use: Magic potions are used.

Why does Smurfette attempt to rescue Gargamel, even though he is trying to kill them? How does he reward their compassion? Is it always possible to “love our enemies”? Is there a difference between avoiding hatred and avoiding danger? How might we forgive someone who could still pose a danger to us?

The musical score in this film offers a variety of sounds and instruments to create mood and emotion. See if you can identify which instruments and sounds are used to motivate different feelings from the audience. Learn more about the movie’s music from our interview with the composer, Christopher Lennertz.

News About "Smurfs: The Lost Village"

From the Studio In this fully animated, all-new take on the Smurfs, a mysterious map sets Smurfette and her best friends Brainy, Clumsy and Hefty on an exciting and thrilling race through the Forbidden Forest filled with magical creatures to find a mysterious lost village before the evil wizard Gargamel does. Embarking on a rollercoaster journey full of action and danger, the Smurfs are on a course that leads to the discovery of the biggest secret in Smurf history! Sony Pictures Animation

The most recent home video release of Smurfs: The Lost Village movie is July 11, 2017. Here are some details… 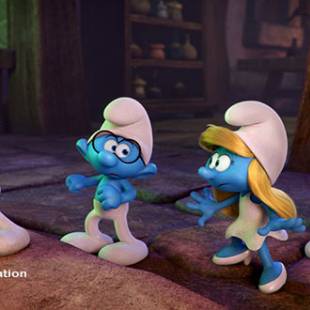