For the most part, "Penguins of Madagascar" resorts to the usual elements you'd expect to find in a children's television cartoon with some attempts to entertain parents as well.

After starring in a supportive role, the Penguins of Madagascar helm their own movie. This time the intrepid flightless birds infiltrate the spy genre, becoming covert agents intent on saving the world -- if they don't inadvertently destroy it first.

Violence C+
Sexual Content B
Profanity B+
Substance Use B+

In the past penguins were riding a wave with filmmakers. March of the Penguins, Surf’s Up, Happy Feet and Mr. Popper’s Penguins were just a few of the movies showcasing the aquatic animals. The fascination with these black and white creatures, however, has cooled slightly. Yet it appears Penguins of Madagascar is trying to reboot the penguin phenomenon.

If you’ve seen any of the Madagascar movies (Madagascar, Madagascar: Escape 2 Africa, Madagascar 3: Europe’s Most Wanted) then you already know what to expect from this elite group of covert New York City Zoo escapees. Led by Skipper (voice of Tom MaGrath), these rough and tumble operatives are prone to slapping, punching and extreme sport-like maneuvers. Each of them has a special role. Kowalski (voice of Chris Miller) is the intelligence guy. Rico (voice of Conrad Vernon) is the combat and weapons specialist. And Private (voice of Christopher Knights), well, he’s just cute.

In this animation the team is swept up in a new adventure when penguins begin disappearing from zoos around the world. The culprit behind the abductions is Dave (voice of John Malkovich), an aggrieved octopus who used to be the darling of the animal facility—before the Antarctic birds arrived. Having lost his place in the spotlight, the eight-legged sea creature is out for revenge.

However the penguins aren’t the only ones on Dave’s trail. Another undercover group of is hunting him as well. Working together are Agent Classified (voice of Benedict Cumberbatch), Short Fuse (voice of Ken Jeong), Eva (voice of Annet Mahendru) and Corporal (voice of Peter Stormare). All are members of the North Wind, and have been assigned to corral the testy, tentacled critter.

For the most part, Penguins of Madagascar resorts to the usual elements you’d expect to find in a children’s television cartoon—except it is presented in 3D. In addition to the typical slapstick humor, the screenplay’s non-stop frenetic action is jam packed with explosions, tranquilizer guns and a Taser. Unfortunately there is also plenty of rude humor, potty jokes and mild sexual innuendo. While some of the more adult-oriented humor may go over the heads of children, these inclusions (plus sight gags, play on words and spoofs on the spy genre) suggest the scriptwriters are trying to entertain the parents in the audience as well.

And just in case you can’t figure out the intent of the plot, the script blatantly explains the moral of the story: It doesn’t matter what you look like, it’s what you do. But while that nice sentiment is sure not to be lost on the older crowd, youngsters still may miss the message in the midst of the melee.

Violence: Characters engage in frequent non-graphic cartoon violence including slapping, punching, pushing and shoving. Some characters are eaten. The action scenes also include explosions, abductions, car chases and crashes. A character is tasered. Others are sucked up into a machine or run over. Characters break into a secure facility and steal items. They are later shot with tranquilizer darts. There are numerous moments of peril and some scary images. A character chokes on a paper clip.

Sexual Content: The characters make some crude sexual comments. Two male characters are seen kissing. Others are slapped on the buttocks.

Alcohol / Drug Use: Characters drink champagne. Others are shot with tranquilizer darts.

What definition do the penguins use for a family in this movie? Why is it important for Private to be more than the “cute” member of the group? What sacrifices does he make for the team? What impact do his actions have on the others?

Dave is motivated by his need for revenge, but in the end he says it leaves him feeling empty. Why is revenge not always as satisfying as we anticipate it will be?

What do the penguins learn about teamwork? Why is it important to sometimes accept others’ help?

The most recent home video release of Penguins of Madagascar movie is March 17, 2015. Here are some details…

The penguins in this movie were introduced in the movies Madagascar, Madagascar: Escape 2 Africa and Madagascar 3: Europe’s Most Wanted. These black and white birds also appear in Mr. Popper’s Penguins, 3 2 1 Penguins and Happy Feet.

Related news about Penguins of Madagascar 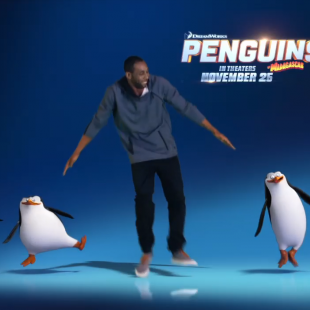