Featuring solid performances and intriguing art design, "The Giver" has a lot to offer those willing to thoughtfully receive.

When Jonas (Brenton Thwaites) is chosen to succeed the "Giver" in his community, he is mentored for the job by the present man of wisdom (Jeff Bridges). From the elder the teen receives some startling secrets about the utopian society in which they live.

Violence C
Sexual Content A-
Profanity A
Substance Use A

Why is The Giver rated PG-13? The MPAA rated The Giver PG-13 for a mature thematic image and some sci-fi action/violence.

What would you give for world peace? With conflicts regularly breaking out in various places around the globe, this question is one each of us has likely contemplated.

But such is not the case for the residents of The Community. They live in a utopian environment achieved by eliminating diversity, making their communications precise, prohibiting lying, and administering a daily injection to each individual to insure the health of all. Overseen by the Elders, every person’s life is regulated from his or her birth and placement into a family unit, to their childhood education, assignment to a job, and eventual departure to “elsewhere” in their old age. The society runs so perfectly that no one even thinks to ask what have they given for world peace.

No one, except perhaps “The Giver” (Jeff Bridges).

Jonas (Brenton Thwaites), a resident of The Community, is about to graduate to adulthood. At the annual ceremony where the career placements are made, the presiding Elder (Meryl Streep) withholds his pronouncement until the end. To the surprise of everyone, instead of being a drone pilot or a nurturer like his friends Asher and Fiona (Cameron Monaghan and Odeya Rush), Jonas is selected to be the next “Receiver of Memory”.

Although this is a great honor, Jonas is entirely unsure of what this titled role entails until his training with The Giver begins. The old man, whose position Jonas will one day assume, explains that he is the keeper of memories from the past. The knowledge he possesses about a time before The Community was formed allows him to council the Elders when they face problems beyond their present experience. The wise man will share this information with the young apprentice by clasping his hands, then transferring images and experiences right into Jonas’s mind.

Despite his deliberate upbringing, nothing has prepared Jonas for the explosion of thoughts and feelings that the Giver asks him to receive. Introduced to joy, happiness and love, it doesn’t take long for him to catch a glimpse of what his mentor means when he says there is so much more to the world than what life in The Community offers. Yet as he comes to understand pain, sorrow and loss too, he starts to sympathize with why The Elders are trying to protect the citizens. It isn’t until Jonas begins to question the costs incurred by his society in order to maintain the benefit of a peaceful existence that he recognizes he may have to use his own judgment to decide if things should change.

Based on a popular young adult novel by Lois Lowery, The Giver also presents the viewer with this age-old conundrum: Which is better? World peace without individual choice, or individual choice that will almost certainly lead to a world without peace?

In presenting the argument, the movie includes montages of news footage showing some of Earth’s most triumphant and disappointing moments (like the fall of the Berlin Wall and the Tank Man in Tiananmen Square). Portrayals of playful snow sledding is juxtaposed with the brutality of war (soldiers being shot and killed are shown), and the beauty of a sunset with the ugliness of greed (an elephant is killed by poachers for the value of its tusks). The story imagines as well the kinds of methods that might be needed to keep a population completely under control. It depicts invasions of privacy (like all-seeing security cameras) and lethal injections (for euthanasia, infanticide and execution).

This content, along the mature themes, make this film a poor choice for young viewers. But it is a strong contender for raising important discussion topics with older children and teens. Featuring solid performances and intriguing art design, The Giver has a lot to offer those willing to thoughtfully receive.

Why is The Giver rated PG-13? The Giver is rated PG-13 by the MPAA for a mature thematic image and some sci-fi action/violence.

Violence: Soldiers on the battlefield are afraid. They shoot and kill one another (Gun shots and hits are shown, but no blood). Some die. Poachers shoot an elephant for its ivory. The animal’s body is struck with bullets and he stumbles and falls. Real news footage is shown of various world conflicts, protests and disasters. Lethal injections are given to infants, the elderly and the disobedient (these are both discussed and shown). A character is chased by law enforcers, and electrocuted with a weapon. A teen and child are dropped from a height into a turbulent river. Characters struggle to survive against the elements.

Sexual Content: A teen couple holds each other’s hands and kiss on a couple of occasions. Body chances during puberty are alluded to.

One of the Elders states, “When people have the power to choose, they choose wrong.” Do you agree with her observation? Are all of the people in The Community unable to make choices? Or are some of them empowered to make decisions, not only for themselves, but also for others? How does the government of The Community compare with some real life philosophies for governing counties, organizations or families?

The Elders of The Community act like the gods of their world. Are they being benevolent by protecting the many citizens from the harm that could be caused by the few? Or does their control prevent the people from really living? How might the scenario presented in this story answer a question sometimes asked by people in the real word: “If there is a God, why does he let bad things happen to good people?”

Is it possible to understand joy if you don’t also understand pain? What other emotions or experiences require us to be familiar with their opposite sides in order to be really appreciated? Would being protected from negative things help or hamper your decision-making?

The Giver tells Jonas that because the people don’t understand some things, they aren’t responsible for their actions. Do you agree? How are knowledge and accountability connected? Can ignorance always be used as an excuse?

This movie is based on a novel by Lois Lowry. It has been adapted into a screenplay by Michael Mitnick.

The most recent home video release of The Giver movie is November 25, 2014. Here are some details…

Other youths find themselves assigned to a future destiny by the societies in which they live in the movies City of Ember, The Hunger Games and Divergent.

Related news about The Giver 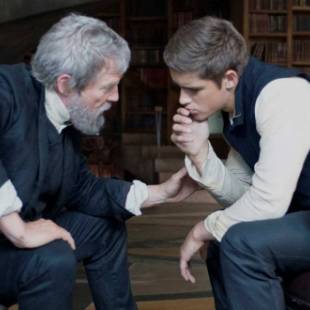