Whether or not you like her work, it is evident by Tim Burton's movie making style that he is interested in Margaret's art - perhaps too evident, if the lack of subtlety is meant to be a parallel.

Aspiring artist Margaret Keane (played by Amy Adams) is also a divorced single mom. But when she accepts a marriage proposal from Walter (Christoph Waltz) she doesn't realize his true love lies in trying to make money off her big-eyed portraits, which he claims as his own work.

Violence B-
Sexual Content B+
Profanity D+
Substance Use C

I remember Margaret Keane’s work—those big-eyed waifs staring out from posters and postcards in my childhood during the late 60s. Even to me as a little kid, those children with the black, empty eyes seemed a little creepy. Now I understand Margaret’s characters were likely reflecting the dark place she was in when she created them.

In the 1950s Margaret (played by Amy Adams) packed her daughter Jane (Delaney Raye) into the back of the family car and drove away from her oppressive marriage to Frank Ulbrich. She landed in San Francisco without any marketable skills other than her love of painting. When Frank threatens to have the courts declare her an unfit mother and take back their daughter, Margaret hesitantly agrees to wed fellow painter Walter Keane (Christoph Waltz) so she can provide a stable home life.

We know it’s not a good idea from the minute Walter whisks her off for a paradise-like wedding in Hawaii. In fact, thanks to the movie’s overstated approach to telling this true story, there’s not a lot of question about what’s coming next or where the plotline will take us. Likewise, it’s no surprise when Walter offers to promote his new wife’s paintings under his own name, stating that people are less likely to buy “lady” art. Eager to have her heartfelt work showcased in a pubic forum, Margaret reluctantly agrees, even going so far as to identify him as the person behind the pictures.

A masterful salesman, Keane soon has Margaret’s artwork in the hands of some very famous people (Natalie Wood and Joan Crowford were among those who commissioned a Keane portrait). And he basks in the limelight that comes with the newfound attention. Meanwhile he keeps the real artist sequestered away in her home studio churning out painting after painting. But Walter is so worried about being exposed that he refuses to let even Margaret’s daughter Jane know what her mother is up to in the locked room.

Unfortunately not everyone in the art world is smitten with Keane’s talent. And although Walter has a local newspaper columnist eating out of his hands, several critics continue to sneer at the doe-eyed children. However, it is Margaret that is the most damaged by both the criticism and the fame. Unable to respond to either, she is forced to remain the supportive, silent wife of the now-famous artist Walter Keane.

Whether or not you like her work, it is evident by Director Tim Burton’s movie making style that he is interested in Margaret’s art—perhaps too evident at times. Like the oversized eyes in Margaret’s paintings, there isn’t a lot of subtlety in this script or nuances to the characters. Walter’s blustering bravado is the foil to Margaret’s acquiescence. She only acts when driven to the absolute end of her rope, which inevitably (and obviously) will happen because of Walter.

It is easy to judge Margaret for being overly submissive, especially when applying 21st century options to her situation. Yet looking at her life through the eyes of 1950s social mores makes it hard not to have some sympathy for the divorced, working mom whose alternatives weren’t as plentiful as they are today.

Why is Big Eyes rated PG-13? Big Eyes is rated PG-13 by the MPAA for thematic elements and brief strong language.

Violence: Men exchange words and brawl in a bar. Comments are made about an oppressive marriage.A man threatens to have another character killed. A man sets a room on fire with a woman and child inside. A character makes some domestic threats.

Sexual Content: Brief comments are made about a man’s dalliances with other women. A character is asked if he has a sexual perversion for young girls. Brief kissing and embracing are shown.

Language: The script contains a strong sexual expletive, a crude hand gesture and several other profanities including scatological slang, terms of Deity, mild curse words and some vulgarities.

Alcohol / Drug Use: Characters smoke frequently in this period piece. One man is depicted as being drunk. Other characters drink in bars, at home or in social settings.

More About the Movie: This movie is based on the real life artist Margaret Keane and her legal struggles with her spouse.

One art critic refers to Margaret’s work at kitschy. What is the definition of good art? Who gets to define what is good or bad? Why is art so personal? Is art, like fashion, something that is trendy? What kind of painting, photography or sculpture appeals to you?

Walter, if not a talented artist, is a consummate salesman. Why did he decide to take credit for Margaret’s work rather than becoming her agent and promote her work as her own? How does his own dream of being an artist play into his decision? More than even being a recognized artist, what does Walter seem to yearn for the most?

One critic is accused of critiquing art because he can’t produce it himself. His response is “Oh dear, that motley chestnut again.” What qualifications do critics (art, literary, fashion, movie) need to have? Is their opinion any more valid than your own? Can a critic help you look at something differently or have a greater appreciation for it?

The most recent home video release of Big Eyes movie is April 14, 2015. Here are some details…

The authenticity of a painter’s talent is challenged in the documentary Tim’s Vermeer. Others who struggle for their share of fame can be seen in The Identical, In A World… and The Artist. 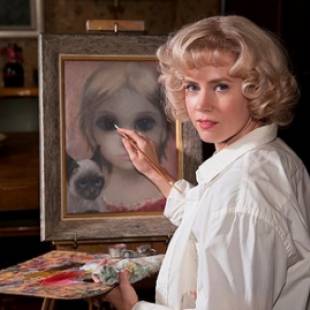