"Bambi"'s lighter side and simple charm has left an indelible impression on the hearts and minds of most fans.

Based on a novel by Felix Salten, Disney’s classic animation follows the life of Bambi, beginning with the deer’s regal arrival to a soft-eyed doe to his coming of age as Prince of the Forest.

Violence B
Sexual Content B+
Profanity A
Substance Use A

Why is Bambi rated G? The MPAA rated Bambi G

“It is widely believed that Bambi has had the greatest impact on viewers of any Disney film,” declares the information in the press package I received from the studio with this famous fawn flick.

I’ll say! They don’t have to provide statistical evidence to convince me of their claim. Do you know any child who has seen the movie that wasn’t traumatized when Bambi’s mom got shot by the hunters?! (Oops, would that be considered a spoiler?)

Released to theaters countless times since its debut in 1942, the tale has been passed from generation to generation, severely affecting the palatability of venison I’m sure! Yet despite this dark moment (and a few others including a threatening forest fire, some stags who lock antlers over a pretty female, a nervous bird downed by a gunman, and a pack of persistent dogs) Bambi’s lighter side and simple charm has left an equally indelible impression on the hearts and minds of most fans.

Based on a novel by Felix Salten, the story follows the life of the Prince of the Forest. Beginning with his regal arrival to a soft-eyed doe, the movie takes as much time as an adoring new parent to watch the wobbly-legged creature learn to walk, sniff blossoms, chase butterflies, and make friends with Thumper the rabbit, a skunk called Flower, and a wise old owl. At first bashful, the young deer grows in confidence while discovering trees offer safety, meadows can be frolicking good fun, girls are giggly, and ice is slippery. Even on the days when he faces nature’s harsher realities, like a thundering rainstorm or the scarcity of food in the winter, Bambi doesn’t know fear until he crosses tracks with Man.

Having Human Beings cast as the enemy helps to remind viewers of our need to treat the world with respect, making Bambi one of the earliest films to promote an environmental message. It also provides a touching example of a mother’s love and sacrifice. As the fawn trades his spots for antlers, moving from birth to twitter-pated to raising offspring of his own, the story imparts a greater understanding of the circle of life. But perhaps its most memorable lesson is the one we (and especially our mothers) can quote by heart: “If you can’t say anything nice, don’t say nothing at all.”

Why do you think audiences tend to feel sympathy for characters who are parentless? How many children’s movies can you name that feature orphans?

Although Bambi discovers he has a father, that figure remains distant, especially throughout the first half of the film. How does that depiction add to our sense of Bambi’s vulnerability?

The most recent home video release of Bambi movie is June 6, 2017. Here are some details…

Walt Disney’s Bambi releases on March 1, 2011, in a Two-Disc Diamond Edition Blu-ray/DVD Combo set, in either DVD or Blu-ray packaging. Whichever version you chose, the following bonus materials will be included:

- Disney’s Second Screen - Content comes alive on your laptop, or iPad as you watch the movie.

Bambi also releases as a Two-Disc DVD Diamond Edition, but not until April 19, 2011. This package offers the these extras:

The Walt Disney Company is bringing the classic movie to the home market on March 1, 2005. To make the DVD Platinum Edition of Bambi, the old negative has been dusted off, digitally restored and the sound remixed in 5.1 Disney Enhanced Home Theater Mix. Now the wonder of “Drip, Drip, Drop, Little April Showers” can be seen with a clarity and crispness you’ve never experienced before. The 2-disc set offers a host of other features as well, that are sure to increase your appreciation for this masterpiece of animation. Bonus features include:

- Featurettes: Inside Walt’s Story Meetings, The making of Bambi|A Prince is Born, Disney Time Capsule 1942: The Year of Bambi, The Art of Bambi, Tricks of the Trade, and Inside the Disney Archive

- Short film: The Old Mill (that was used to test some of the techniques used in Bambi)

- Sneak peak: The Legacy Continues: Bambi and The Great Prince of the Forest,

Walt’s ability to make a masterpiece out of the animation art form is also evident in his version of Pinocchio. The circle of life and the loss of a parent are main thematic elements in The Lion King, another Disney animation. 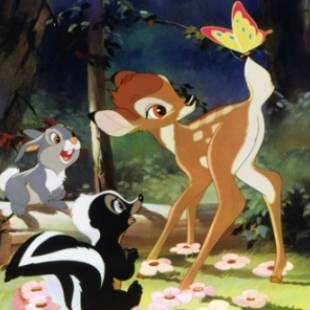