This disaster flick depicts perilous situations and includes some disturbing moments, but it may be a fine example of the virtue of sacrifice and duty for older children. Content concerns are minor.

Members of the Coast Guard have to use their best skills and training when they set out to rescue seamen caught in the worst blizzard to hit Cape Cod in 1952.

Violence B-
Sexual Content A
Profanity B
Substance Use A-

In The Finest Hours we relive what is widely regarded as the most historic sea rescue in US Coast Guard history. It’s February 1952 and a raging storm is battering the New England coast. The SS Pendleton, a wartime-built oil tanker, is caught in the buffeting waves and eventually splits in half from the tremendous force. The crew on the bow section perishes when the front half of the ship quickly sinks. However 33 men are still afloat in the stern. Through the creative thinking of the ship’s chief engineer, Ray Sybert (Casey Affleck), the crew manages to buy themselves precious time in the hope that help will arrive.

Fortunately for those aboard the sinking ship, a rescue effort is underway. Unfortunately for both them and the four men of the Coast Guard who have accepted the assignment, it is more of a suicide mission than a real plan. Led by Bernie Webber (Chris Pine), the tiny crew sets out in a motorized lifeboat to try and find the wreck. Facing face forty-foot waves, high winds, icy water and blinding conditions, it’s apparent to all involved that they are more likely headed toward their own destruction.

Despite his fellow seamen urging him to return to port, Coxswain Webber doggedly braves the elements and somehow manages to find the Pendleton. Even more amazingly, he maneuvers the small craft next to the massive tanker and successfully pulls off all but one of the men. Meanwhile, back on shore, his fiancée Miriam (Holliday Grainger), along with the local townsfolk who have witnessed far too many of these weather emergencies, keep faithful watch for the return of the sailors.

This disaster flick depicts characters in very perilous situations and includes some sad and disturbing moments. A crewman loses his life while trying to save others. Many more are hurt after being tossed about by the sea. However, the movie may still be a great pick for older children and teens because it is a fine example of the virtue of sacrifice and the importance of holding to obligations no matter how tough the circumstances. Profanities are infrequent and alcohol use is only briefly portrayed.

The Finest Hours also offers adventure and history. Although some of the details have been altered for dramatization purposes, the core story is true. These dutiful members of the Coast Guard were recognized for their heroic actions then, and their tale serves as a powerful reminder now of the real life risks first responders make to protect and save others.

Violence: Characters are in constant peril from a massive storm where high winds, rain and snow cause enormous ocean waves, low visibility, and icy conditions. The treacherous weather put two ships at risk of sinking and leaves the crewmen fighting for their lives. The film depicts an oil tanker being ripped in two: the front half sinks and it is implied that all men aboard are killed. Survivors on the back half struggle to keep themselves afloat, and some injuries occur while they wrestle with equipment and heavy chains. Members of the Coast Guard mount a rescue mission even though they face impossible obstacles that put their lives at risk. Some characters drown and a body is seen floating in the water. Other disasters and deaths at sea are mentioned and discussed. Family members grieve the loss of a loved one. A car gets stuck in a snow bank and stands the driver in the cold for a time. Characters argue about whose plan they should follow during the disaster. Some characters mock or ridicule others.

Language: The script includes several uses of terms of deity as expletives, mild profanity and name-calling.

Alcohol / Drug Use: Characters drink at a bar.

Other: Characters pray when they are in a desperate situation.

Learn more about this amazing 1952 real life rescue. Another journalist records this account of the Pendleton.

Bernie Webber is a man who carefully follows regulations. What events cause him to reconsider the wisdom of those conventions? Why does he start to rely on his own intuition instead? When is it important to obey orders? When might it be more appropriate to use your own judgment? How can you tell which situation is which?

How important is trust in your leader during a crisis? What do Bernie Webber and Ray Sybert have to do to get the co-operation of their men? Would either crew have survived if they hadn’t pulled together as a team?

When facing perilous situations, some of the characters start to sing. How does music help to calm their fears? What coping tactics might you use to fortify your courage?

What unconventional things does Miriam do because she is worried for Bernie’s safety? Do those things help him? What does she learn about responding to disaster by watching another woman cope with the situation? What things did she do to quiet her concerns? What can you learn from this example?

From the Studio: In February of 1952, one of the worst storms to ever hit the East Coast struck New England, damaging an oil tanker off the coast of Cape Cod and literally ripping it in half. On a small lifeboat faced with frigid temperatures and 70-foot high waves, four members of the Coast Guard set out to rescue the more than 30 stranded sailors trapped aboard the rapidly-sinking vessel. Written by Walt Disney Studios Publicity

The most recent home video release of The Finest Hours movie is May 24, 2016. Here are some details…

The rigors of training for the Coast Guard are shown in the movie The Guardian . A sailor is stranded alone at sea in All is Lost.

Related news about The Finest Hours 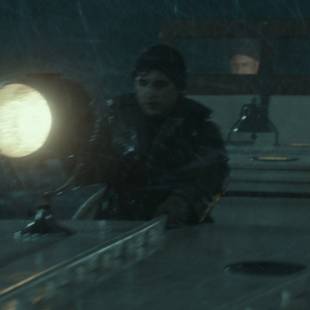